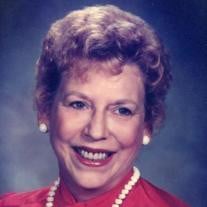 Harriet Joan “Goldie” Cagle, age 80, of Marion, IL passed away at 4:48 p.m. on Sunday, November 11, 2012, at her home with her family by her side. She was born in Marion, IL on Monday, January 11, 1932, the daughter of Harry and Mae (Scott) Cook. She attended school in Marion and was a graduate of Marion High School. After graduation she went on to attend Southern Illinois University in Carbondale pursuing a Degree in Music. She also performed in the theater and sang opera. Harriet was united in marriage to James Harry Cagle on Friday, October 27, 1951, in Biloxi, MS and together they have enjoyed over sixty-one years of marriage. After her marriage she decided not to work outside of the home until her children were raised and on their own. She spent most of her life seeing to the needs of her family and managing her home. She did work for several years at Jefferson School of Marion with the hearing impaired. Harriet was a member of Zion United Church of Christ of Marion, IL. She was an active lifetime member of the VFW Ladies Auxiliary Post #1301 of Marion, IL and also served as State President of the ladies auxiliary. She was very patriotic and active in the community thru the ladies auxiliary. In her spare time she enjoyed watching a good basketball game, working puzzles and was known for being a very creative person. She loved animals and especially enjoyed having her coffee in the mornings and listening to the house wrens outside of her home. She always had interest in the many activities her family was involved in, especially those of her grandchildren and great grandchildren. She loved the many times her family would all gather together and cherished the many memories that were created. Now those who are left behind will cherish the many memories that have been created. She is survived by her husband, James H. Cagle of Marion, IL; daughter, Beth Cagle of Marion, IL; granddaughter, Jamie Allen and her husband, Chris of Marion, IL; two great grandchildren, Kendal Cowper and Olivia Allen both of Marion, IL; brother and sister-in-law, William and Shirley Cook of Franklin, IN; two nieces, Barbara and Mary Jane; two nephews, Harry and Terry, other extended family members and many friends. She was preceded in death by her parents and sister and brother-in-law, Letha and Gene Thomas. Arrangements for Harriet Joan “Goldie” Cagle were entrusted to Wilson-McReynolds Funeral Home 900 N. Court Street, Marion, IL. The time of visitation was on Saturday, November 17, 2012, between the hours of 10:00 a.m. and 11:00 a.m. at the funeral home. During the time of visitation a “Reflection of Life” DVD Memorial Tribute featuring special people, places and events in Harriet’s life was presented to the family and friends. Following the time of visitation the memorial service was at 11:00 a.m. with Rev. John Holst presiding. Comments of memory were presented by Harriet’s granddaughter, Jamie Allen and great grandson, Kendall Cooper. Harriet’s great granddaughter, Olivia Allen read a special poem. Members of the VFW Ladies Auxiliary Post #1301 of Marion presented a special memorial service. Those participating were President, Pam Largent; Sr. Vice President, Marilyn Marek; Conductress, Kay Shew; Chaplain, Marsha English; Treasurer, Karen Robinson and Guard, Rita Sigley. Other comments were presented by Past Illinois Ladies Auxiliary State President, Linda Jackson. The prelude recorded instrumental musical selections were “The Stroll”, “String of Pearls”, “Unchained Melody”, “Terms of Endearment” and “Somewhere Out There”. Special recorded musical selections presented during the service were “In My Life” by Bette Midler, “Softly, As I Leave You” by Frank Sinatra and “Amazing Grace” as a instrumental selection. The postlude recorded instrumental musical selections were “Greensleeves”, “Ava Maria” and “Angels Watching”. After the memorial service the family and friends gathered at Zion United Church of Christ in Marion, for a meal and continued time of fellowship and support. For additional information please contatct the funeral home by calling 618-993-2131.

The family of Harriet Joan "Goldie" Cagle created this Life Tributes page to make it easy to share your memories.

Send flowers to the Cagle family.