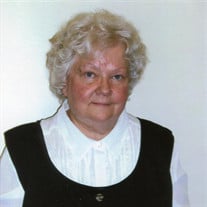 Heidelore Jutta “Heidi” Kessel, age 75, of Marion, IL, passed away peacefully at 2:25 p.m. on Friday, July 28, 2017, in Heartland Regional Medical Center of Marion. She was born in Brendlorenzen, Germany, on Thursday, November 13, 1941, the daughter of Wilhelm and Helene (Fehling) Erbes. She grew up in Germany before moving to the United States in 1972 and becoming a U.S. citizen. She was a member of the Southern Illinois Worship Center in Energy, IL. She worked in nursing and hospital care in Germany and later or for Marion Memorial Hospital and Herrin Hospital in medical records, some of the area care centers and home health care and retired in the mid 90’s due to her health. She is survived by one daughter, Ramona M. Walker of Atlanta, GA; four sons and two daughter-in-law, Ralf B. Smith of Darmstadt, Germany, Andreas and Marina Zimmermann of Waghaesel, Germany, Robert W. Smith of Pittsburg, PA and Bryan D and Alicia of Marion, IL, the Lake of Egypt community, eight grandchildren and three great-grandchildren. She was preceded in death by her parents; infant son and sister, Helga Richter. Arrangements were entrusted to Wilson-McReynolds Funeral Home, 900 N. Court St., Marion, IL. The graveside service was at 1:00 p.m. on Monday, July 31, 2017, in Rose Hill Cemetery of Marion with Pastor Kerry Cox presiding. For additional information please call the funeral home at 618-993-2131.

The family of Heidelore Jutta "Heidi" Kessel created this Life Tributes page to make it easy to share your memories.