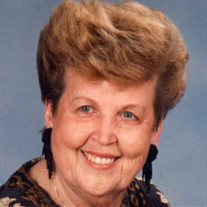 Helen L. Emery, age 92, of Marion, IL passed away peacefully at 5:35 a.m. on Sunday, December 31, 2017, at her son, Randy’s, home south of Marion. She was born on Sunday, May 31, 1925, in Marion the daughter of James Dewey and Effie Mae (Green) Shanks. Helen attended school in Marion and was a graduate of Marion High School Class of 1943. She continued her education by attending Southern Illinois University at the VTI Campus where she received her education in cosmetology. Helen was united in marriage to Charles William Emery on Saturday, January 12, 1946, in Marion and together they shared 60 years of marriage until his death on Saturday, March 25, 2006. After she became a cosmetologist, she opened and operated a beauty shop at her home called “The Chat and Curl Beauty Shop” until she retired in 1990 after 40 years. Helen has been a member of Scottsboro Baptist Church of Marion since the age of 5 and currently was the oldest member. She also was a member of the “Prayer and Share” ladies group of the church. She was an active person during her lifetime, always willing to help others and enjoyed volunteering at the Lighthouse Shelter. She was known for her baking ability and had baked many wedding cakes for her family and friends who would ask. She enjoyed playing pinochle and was a member of a group of ladies that got together monthly and was with the group in December for their Christmas party. Helen also enjoyed playing dominos and in the past, was a former member of the Eastern Star of Marion. For many years Helen and her husband were members of the Wally Byam Air Stream Caravan Club and had traveled all over the country. Though she was busy all her lifetime with work and other interests she had a love for her family and was very proud of her children, grandchildren, and great grandchildren. She always would enjoy the many times they would get together and cherished the memories that were created. Now those left behind will always cherish the many memories that have been created. She is survived her daughter, Jayne A. McNeill of Marion; two sons and daughters-in-law, Jim and Patty Emery and Randy and Marti Emery, all of Marion; four grandchildren, Travis Emery and his wife Anne, Traci Robertson and her husband Jim, Sean Emery and his wife Tracy, all of Marion, and Shanna Drone and her husband David, of Carbondale; eight great grandchildren, Ben Emery and his wife Marissa of Clarksville, TN and Kyle Emery, Brianna Robertson, Dustin Robertson, Clint Emery and his wife Emily, Josh Emery, Tyler Jacobs and Tori Jacobs all of Marion; soon to be born, great-great grandson, Jack Randall Emery; sister-in-law Deloris Dungey and her husband Earl Ray of Marion; brother-in-law, Lester Emery and his wife Maxine of Marion, other extended family, and many friends. She was preceded in death by her parents, husband, brother, James Shanks, and son-in-law, Mark McNeill. Arrangements for Helen L. Emery were entrusted to Wilson-McReynolds Funeral Home, 900 North Court Street, Marion, IL. The time of visitation was 11:00 a.m. until 1:00 p.m. on Thursday, January 4, 2018 at the funeral home. Following the time of visitation, the funeral service was at 1:00 p.m. with Rev. Kevin McNeely and Rev. Mike Hood presiding. Comments of memory were presented by Helen’s grandson, Travis Emery. The prelude and postlude musical selections were presented by pianist, Lori Creamer. Special vocal musical selections presented during the service were “How Great Thou Art” and “Master of the Wind” both by Lori Creamer who accompanied herself on the piano and “Somebody’s Praying for Me” by Frank McCree with recorded accompaniment. Interment followed next to her husband in the Rose Hill Cemetery of Marion. Pallbearers were Ben Emery, Kyle Emery, Dustin Robertson, Josh Emery, Tyler Jacobs and Clint Emery. Following the committal service at the cemetery the family and friends gathered at Scottsboro Baptist Church for a meal and continued time of fellowship and support. For those who preferred, memorial contributions may be made to “Scottsboro Baptist Church Building Fund” and mailed in care of Wilson-McReynolds Funeral Home, 900 North Court Street, Marion, IL 62959. Memorial envelopes were available at the funeral home. For additional information please contact the funeral home by calling 618-993-2131.

The family of Helen L. Emery created this Life Tributes page to make it easy to share your memories.