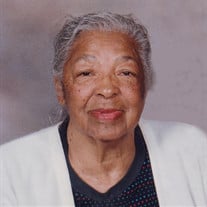 Helen G. Latham, age 88, of Marion, IL, passed away peacefully at 5:30 a.m. on Saturday February 13, 2016, in the Shawnee Christian Nursing and Rehabilitation Center of Herrin, IL. She was born on Thursday, September 1, 1927, in Vienna, IL the daughter of Lum and Ruby (Scott) Pickens. Helen was united in marriage to William F. Latham in Vienna, IL. In her spare time she enjoyed crocheting; playing cards, especially spades and rummy, cooking at the church and at the Boyton Street Community Center. She enjoyed being outdoors sitting on her porch and visiting with her family and friends. She especially loved being with her family and always enjoyed the many times they all would gather together. The many memories that have been created will now be cherished by those she leaves behind. She is survived by her daughter, Jacquiline “Jackie” Monyea of Marion; two grandsons, Jamal Monyea of Marion and Harold Merriwether, Jr. of Grand Blanc, MI; granddaughter, Denise Merriwether of Grand Blanc, MI, a host of nieces, nephews, other extended family and many friends. She was preceded in death by her parents, husband; daughter, Janice Merriwether; son, Thomas Pickens; granddaughter Tina Marie Pickens; sister, Esther Marie Pickens; two brothers, James and Robert Pickens and special friend, Edward Crawley. Arrangements for Helen G. Latham were entrusted to Wilson-McReynolds Funeral Home, 900 N. Court St., Marion, IL. The visitation was from 11:00 a.m. until 1:00 p.m. on Friday, February 19, 2016 at Paul’s Chapel Missionary Baptist Church, located at 902 South Monroe Street, Marion, IL. Following the time of visitation the funeral service was at 1:00 p.m. with Rev. Virgil M. Walton, Jr. presiding and assisted by Rev. Dan Freeman and Rev. Crawford Wilson. Comments of memory were made by many in attendance. The prelude was a musical medley presented by pianist, Delores Ann Isaac. Special vocal musical selections presented were “Rough Side of the Mountain”, “I’m Free” & “God’s Got It All In Control” presented by Delores Ann Isaac who accompanied herself on the piano. Special acapella musical selection presented was “Soon I Will Be Done” by Clarissa Smith & “Precious Lord Take My Hand” was presented by Roscoe Jenkins accompanied by Delores Ann Isaac on the piano. The postlude musical selection presented was “Soon and Very Soon” by Delores Ann Isaac who accompanied herself on the piano. Interment followed in Maplewood Cemetery of Marion, IL. Pallbearers were Charlie Gunn, Roman Allen, Jonah Johnson, Deontae Pouncil, Jacob Allen, Chad Ditterline and Dan Freeman. Following the service the family and friends gathered at Paul’s Chapel Missionary Baptist Church for a meal and continued time of fellowship and support. For those who preferred, memorial contributions were made to the “Paul's Chapel Missionary Baptist Church” and mailed in care of Wilson-McReynolds funeral Home, P.O. Box 370, Marion, IL 62959. Memorial envelopes were available at the church and funeral home. For additional information please contact the funeral home by calling 618-993-2131.

Helen G. Latham, age 88, of Marion, IL, passed away peacefully at 5:30 a.m. on Saturday February 13, 2016, in the Shawnee Christian Nursing and Rehabilitation Center of Herrin, IL. She was born on Thursday, September 1, 1927, in Vienna, IL the... View Obituary & Service Information

The family of Helen Gertrude Latham created this Life Tributes page to make it easy to share your memories.

Send flowers to the Latham family.