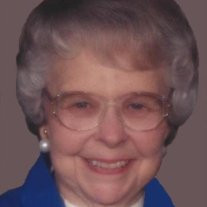 Helen Beatrice “Bea” Ardis, age 98, of Marion, IL and formerly of Herrin and Vienna, IL, passed away peacefully at 7:20 a.m. on Thursday, May 16, 2013, at her home. She was born on Saturday, November 7, 1925, in Vienna, IL, the daughter of Carl A. and Norma (Ragain) Bellamy. She grew up in Vienna and was a graduate of Vienna Township High School in 1931. She later studied various courses including numerous Real Estate courses at both SIU and John A. Logan College. Bea was first united in marriage to Claude G. Hackett who died in 1960 and later married lisle R. Ardis on December 31, 1963 and he passed away on January 19, 1976. In her early working years she was employed at the Johnson County Court House by both the Circuit and County Clerks and later worked for the Johnson County Abstract Company. After moving to Marion she acted as secretary for the Marion Chamber of Commerce until accepting the position as manager in the office of the Williamson County Housing Authority. After moving to Herrin, Bea was licensed and worked as a Real Estate salesperson for several years. Currently she is a member of the First Presbyterian Church of Herrin, IL and was a former member of the First Methodist Church of Marion, IL. She has been a member of the Herrin Woman’s Club since 1965, a former member of Marion Woman’s Club and the Arizona State Poetry Society. She loved writing poetry and had numerous awards in the Woman’s Club State Poetry contests and was published in many anthologies and magazines of the Arizona Poetry Society. Bea was listed in the International Who’s Who in Poetry in 1970-71. She is survived by her long time companion, John W. “Bill” Schafer of Marion, IL; two grandsons, Jeffrey B. Hunt and wife, Marsha of Lantana, TX and K. Bradford “Brad” Hunt and wife, Cindy Campbell Hunt of Marion, IL; six great grandchildren, Chris Hunt and wife, Brandy, Jenny Hunt, Emily Kincaid and husband, Peppy, Scott Hunt, Campbell Hunt and Logan Hunt; five great great-grandchildren, Maddy, Ava and Cadence Kincaid and Gavin and Hailey Hunt; two nephews, Jon R. Bellamy of Centralia, IL and Karl E. Bellamy of Vienna, IL, other extended family and many friends. She was preceded in death by her parents, two husbands; daughter, Patricia J. Barker; sister, Myrtis Lau; two brothers, James Virgil and Robert L. Bellamy and her nephew and his wife, Robert F. and Joan Lau. Arrangements for Helen Beatrice “Bea” Ardis have been entrusted to the Wilson-McReynolds Funeral Home, 900 N. Court Street, of Marion, IL. The time of visitation for family and friends will be on Tuesday, May 21, 2013 from 12:00 noon until 2:00 p.m. at Wilson-McReynolds Funeral Home. Following the time of visitation the funeral service will be at 2:00 p.m. on with Rev. Paul Lee presiding. Entombment will follow in Rose Hill Cemetery of Marion, IL. For those who prefer, memorial contributions may be made to “Southern Region of American Cancer Society” with funds to be used locally. Memorial contribution envelopes will be available at the funeral home or may be mailed in care of Wilson-McReynolds Funeral Home, P.O. Box 370, Marion, IL 62959. For additional information please call 618-993-2131.

The family of Helen Beatrice "Bea" Ardis created this Life Tributes page to make it easy to share your memories.