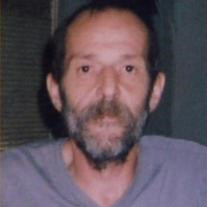 Henry Andrew “Andy” Ticer, age 55, of Marion, IL passed away at 10:43 a.m. on Thursday, October 18, 2012, in Heartland Regional Hospital in Marion, IL. He was born on Sunday, February 10, 1957, in Murphysboro, IL, the son of Benjamin and Sharlett (Beasley) Ticer. Since September 10, 1985, Andy and Theresa Black have shared the past twenty seven years together. He was a hard worker and always eager to be of help when there was work to be done. He loved to be outdoors and enjoyed spending time in the woods. He was an avid lover of animals and was a member of the Humane Society and the No Kill Shelter of Marion. He is survived by his wife, Theresa Marie Black-Ticer of Marion, IL; sister and brother-in-law, Benasue and Kevin Daley of Gorham, IL; three brothers and two sisters-in-law, John and Georgia Ticer of Murphysboro, IL, Charles and Tacy Ticer of Dongola, IL and Bruce Ticer of Murphysboro, IL a host of nieces and nephews and other family members. He was preceded in death by his parents. Arrangements for Henry A. “Andy” Ticer were entrusted to Wilson-McReynolds Funeral Home, 900 N. Court St., Marion, IL. The time of the visitation was from 5:00 p.m. until 8:00 p.m. on Sunday, October 21st at the funeral home. The funeral service was at 6:00 p.m., on Sunday, October 21, 2012, in Wilson-McReynolds Funeral Home of Marion, where his family presided. During the service, the poem “If Tomorrow Never Comes” was read by Theresa and comments of memory were presented by Karen Childers. The prelude and postlude musical selections were recorded selections from the 1950’s and 1960’s. Special recorded vocal selection presented during the service was “Ava Maria” by Perry Como. Following the conclusion of the service the visitation continued until 8:00 p.m. In lieu of flowers, the family requested that memorial contributions be made to assist the family, in care of “Theresa Black-Ticer” and were mailed in care of Wilson-McReynolds Funeral Home, P.O. Box 370, Marion, IL 62959. Memorial envelopes were available at the funeral home. For additional information or to leave an online condolence or memory, please visit our website at www.wilsonmcreynolds.com or call 618-993-2131.

The family of Henry Andrew "Andy" Ticer created this Life Tributes page to make it easy to share your memories.

Send flowers to the Ticer family.