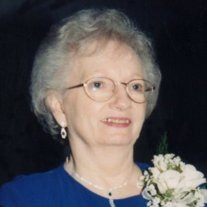 Herma R. Clark, age 85, of Marion, IL, passed away peacefully with her family by her side at 12:00 p.m., on Monday, September 16, 2013, in Angel Acres Care Center of Marion, IL. Herma was born, Monday, April 16, 1928, in Rector, AR to Arter W. and Lela M. (Graves) Rasberry. She married Robert L. Clark on Tuesday, July 16, 1946, and together they shared sixty four years of marriage until he passed away on Thursday, May 27, 2010. Herma was a lifetime member of Second Baptist Church of Marion, IL. When she was a young woman, she sang in the choir, taught a young ladies Sunday school class and assisted in counting and depositing tithes and offerings for the church. Herma was a long-time employee of the Bank of Egypt of Marion, IL. She began her career working in the bookkeeping department; before retiring she was promoted to Assistant Cashier. Herma enjoyed shopping and decorating her home as well as spending time with her family. Survivors include her daughter and son-in-law, Bari Lynn and Jim Nolen of West Frankfort, IL; grandson and wife, Brent and Robin (Rader) Pritchett of Marion, IL; great-grandson, Matthew Robert Pritchett, of Marion, IL; brother-in-law and sister-in-law, Bill and Helen Clark of Marion, IL and brother-in-law and sister-in-law, Harold and Lois Bell of West Frankfort, IL, along with nieces, great-nieces, nephews and great-nephews. She was preceded in death by her parents; husband, Robert and two sisters, Jena Rasberry Bloodworth and Dorothy Rasberry Chamness. Arrangements for Herma R. Clark were entrusted to Wilson-McReynolds Funeral Home, 900 N. Court St., Marion, IL. The visitation for the family and friends was from 11:00 a.m. until 1:00 p.m. on Friday, September 20, 2013, at the funeral home. During the time of visitation a “Reflection of Life” DVD Memorial Tribute featuring special people, places and events of Herma’s life was presented to the family and friends. Following the time of visitation the funeral service was at 1:00 p.m., with Dr. Brett Beasley presiding. During the service a special DVD of “Amazing Grace (My Chains Are Gone)" by Chris Tomlin was presented. The Eulogy was read by Beverly Reed. The prelude and postlude musical selections were recorded selections. A Special recorded musical selection presented during the service was “Standing on The Promises” by the Nashville Gospel Singers. Interment followed next to her husband in Rose Hill Cemetery of Marion, IL. Pallbearers were Brent Pritchett, Micah Norris, Scott Chamness, Rodney Laningham, Dakotah Norris, Chris Blumenstock and Austin Norris. Following the service the family and friends gathered at the Second Baptist Church of Marion, for a meal and continued time of fellowship and support. For those who prefer, memorial contributions may be made to “Hospice of Southern Illinois”. Memorial contribution envelopes were available at the funeral home or mailed in care of Wilson-McReynolds Funeral Home, P.O. Box 370, Marion, IL, 62959. For additional information please contact the funeral home by calling 618-993-2131.

The family of Herma R. Clark created this Life Tributes page to make it easy to share your memories.

Send flowers to the Clark family.