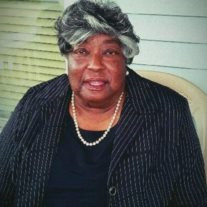 Izetta R. Salone, age 79, of Marion, IL was called home by her Lord, with her family at her side, at 7:01 p.m. on Thursday, March 20, 2014, in Heartland Regional Hospital in Marion, IL. She was born on Monday, November 12, 1934, in Marion, IL the daughter of John Willie and Ethel (Garret) Jones. Izetta was a lifelong resident of Marion, IL, received her education in Marion and was a Marion High School Graduate. She accepted Christ at an early age and was a member of Paul’s Chapel Baptist Church of Marion where she was a mother of the church and worked in the church kitchen alongside her mother for many years. She was also a member of the Order of the Eastern Star. Her working career outside of her home was as a cook for Marion Memorial Hospital where she worked for many years. She was a devoted mother, grandmother and great grandmother and she always enjoyed the times she shared with her family and friends. Izetta was united in marriage to Samuel S. Salone on December 20, 1971, in Marion, IL and together they have shared nearly thirty-five years of marriage until his death on March 19, 2006. She is survived by her five children, Clyde Edward “Ricky” Lacy, Jr. and wife, Tanya Swalls of Paso, WA, Mary Kay Lacy-Martin and her husband, Carl Martin of Stonefort, IL, June Ann Lacy-Hall of Marion, IL, Steven Ray Lacy of Marion, IL and Brian Keith Salone and wife, Shirley of Marion, IL, twelve grandchildren, sixteen great grandchildren; special niece, Debrah Jones Purnell of Pittsburg, PA; two special nephews, Johnny Stewart of Nashville, TN and Carl Stewart of Cambria, IL; special cousin, Maurice Acree of Marion, IL; special and dear friend, Ruth JoAnn Davidson of Marion, IL, also several nieces, nephews and cousins, other extended family members and many friends. She was preceded in death by her parents; sister, Nellie Pearl Stewart; infant sister, Nancy Jones; two brothers, Raymond Jones and Richard Jones and grandson, Kannadas Ivy. Arrangements for Izetta R. Salone were entrusted to Wilson-McReynolds Funeral Home, 900 N. Court Street, of Marion, IL. The time of the visitation was between the hours of 11:00 a.m. and 1:00 p.m. on Saturday, March 29, 2014, at Wilson-McReynolds Funeral Home. During the time of visitation a “Reflection of Life” DVD Memorial Tribute featuring special people, places and events in Izetta’s life was presented to the family and friends. Following the time of visitation the funeral service was at 1:00 p.m., with Rev. Virgil M. Walton presiding. The prelude and postlude instrumental piano musical selections were presented by Delores Isaac. Special vocal musical selections presented during the service were “Precious Lord, Take My Hand” by Monica Acree being accompanied by pianist, Delores Isaac and “Jesus Promised Me a Home” and “God’s Got It All In Control” both by Delores Isaac who accompanied herself on the piano. Izetta’s son, Brian Salone presented the welcome and prayer. Reading of the Mother Board Resolution was by Jerri Moultrie and the reading of the condolences was by Ron Ferguson. Flowers girls were Jodi Lacy, Ciara Carter, Bria Salone, Ja’Shayla Lacy, Amaria Salone, Nikkie Hall, Tyra Lacy and Kameela Lacy. Interment followed in Maplewood Cemetery of Marion, IL. Pallbearers were Shawn Lacy, Carl Stewart, Bobby Thompson, Wayne Hall, Marcus Lacy and Carl Martin. Following the committal service at the cemetery the family and friends gathered at the Boyton Street Community Center for a meal and continued time of fellowship and support. For those who preferred, memorial contributions were made to “Paul’s Chapel Baptist Church”. Memorial contribution envelopes were available at the funeral home or were mailed in care of Wilson-McReynolds Funeral Home, P.O. Box 370, Marion, IL 62959. For additional information, please contact the funeral home by calling 618-993-2131.

The family of Izetta R. (Jones) Salone created this Life Tributes page to make it easy to share your memories.