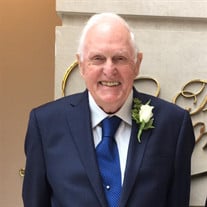 Jack G. Hill, age 84, of Marion, IL, passed away at 6:30 a.m. on Monday, March 2, 2020, in the Veteran’s Administration Hospital Community Living Center of Marion. He was born on Wednesday, February 5, 1936, at home in Marion, the son of Dewey Alma and Della Mae (Marvel) Hill. Jack grew up Marion and was a graduate of Marion High School Class of 1953. He answered the call of this nation by enlisting into the United States Marine Corps on March 30, 1954, and after his period of faithful service was honorably discharged with the rank of Corporal on June 30, 1957. After his period of military service he continued his education with the Illinois Bankers Association receiving his diploma in September of 1966, and later attending the Graduate School of Banking with the University of Wisconsin receiving his diploma in August of 1972. Jack began his banking career with the Bank of Marion and advanced to the position of Vice President of Installment Loans. Then in September of 1976, he changed his career to working for the Cypress Amax Coal Company. His duties included operating and maintaining the preparation plant until his retirement in August of 1996. He was awarded a Certificate of Recognition from Amax Coal Industries, Inc. for 15 years of service. He was a member of the United Mine Workers of America. In his spare time he enjoyed playing cards, bowling, golfing and playing dominoes. Jack was known for being devoted to his family. The many memories shared with his family and friends will be cherished by those who knew and loved him, especially his friends Stan and Maria Cantrell. He is survived by two daughters and sons-in-law, Cynthia “Cindy” and Robert “Bob” Plain of Roanoke, VA and Kay and Keith Jones of Florence, AL; two grandchildren, Jacqueline Broyer and husband George of Midlothian, VA and Jake Plain and wife Sarah of Ashburn, VA, his first great grandson is expected in April of 2020; sister, Wanda R. Carroll of Woodlawn, IL; brother and sister-in-law, Tom and Diana of Three Rivers, TX, several nieces and nephews, other extended family and many friends. He was preceded in death by his parents. Arrangements have been entrusted to Wilson-McReynolds Funeral Home in Marion. In accordance with Jack’s wishes there will be no visitation or service at this time. The family has requested for those who prefer memorial contributions may be made to "The Veteran’s Community Living Center”. Memorial may be mailed to the Wilson-Reynolds Funeral Home, 900 North Court St., Marion, IL 62959. For additional information please call the funeral home at 618-993-2131.

The family of Jack G. Hill created this Life Tributes page to make it easy to share your memories.

Send flowers to the Hill family.