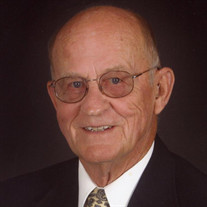 Jacob “Jay” William Rix, age 87, of Marion, IL, passed away peacefully with his family near, at 1:15 a.m. on Saturday, October 10, 2020, at his home. He was born on Thursday, September 14, 1933, at home on the family farm located south of Marion, the son of Earl “Dutch” Wayland and Anna Maria (Kobler) Rix. Jay, as he was known by, attended school in Marion and was a graduate of Marion High School Class of 1951. He answered the call of this nation by serving in the United States Army from 1953 to 1955. During this time he served overseas in England and after his period of faithful service was honorably discharged with the rank of Corporal. Jay was united in marriage to Almedia “Pat” June Dick on Saturday, March 7, 1953, in the First Baptist Church of Marion. Together they shared over 50 years of marriage until her death on Saturday, May 10, 2003. His working career began during his high school years working at Goss Appliance Store in Marion, for several years. He later worked for IBC Homes of Marion, until he started his long career with C.I.P.S. in 1966, and continued there for 29 years until he retired in 1995. After his retirement he began working with his brother, Clifford in construction for the next 7 years. Jay was appointed as Marion City Commissioner, at the death of Commissioner Jimmy Stewart. He served his remaining term for 2 ½ years. He later was elected City Commissioner and served in that position for 2 terms. During that time he served as Commissioner of Health and Safety (Police and Fire). He truly enjoyed serving in that position and always wanted to improve both departments and was instrumental in developing Marion’s first Swat Team. On hearing of Jay’s death, former Marion Police Chief Dawn Tondini said “I could not have asked for a better commissioner to help do the things we did to make the department better. He was my hero”. He was a member of the Marion Church of Christ and was a former member of both the Marion Lion’s Club and Marion Chamber of Commerce. Jay loved to spend his spare time outdoors, especially on his land in the country. He was very active and was always working around his home on different types of projects. He loved his family and enjoyed the many times they all shared together. He was always interested in all of their many activities, especially those of his grandchildren and great grandchildren. The memories created will now be cherished by those he leaves behind. He is survived by three daughters and one son-in-law, Jana and David Cooke of Siloam Springs, AR and Kimberly Dooley and Tamie Rix both of Marion; six grandchildren, Christopher Cooke and wife, Meagan of Springdale, AR, David Charles “Trey” Cooke, III of Dallas, TX, Clayton Cooke and wife, Ayesha of Franklin, OH, Brent Dooley and wife, Rachel Rehbein of Duluth, MN, and Brian Dooley and significant other, Haley Doan and Brock Dooley and significant other, Emily Reamy all of Marion, and Katie and Caleb Henderson and their two children all of Shiloh, IL, who he also considered as his grandchildren; seven great grandchildren; brother-in-law, Leonard Russell of Marion; sister-in-law, Carol Rix, a host of nieces, nephews, cousins, other extended family and many friends. He was preceded in death by his parents; wife, Pat; infant son, Kris Erik Rix; three sisters and brothers-in-law, Earline and Gene Chamness, Elaine and Ralph Cawvey and Charolette Russell and her first husband Darwin Baggett and two brothers and sister-in-law, Clifford and Roberta Rix and Gary Rix. Arrangements have been entrusted to Wilson-McReynolds Funeral Home, 900 N. Court St., Marion. The visitation will be from 10:30 a.m. until 1:30 p.m. on Wednesday, October 14, 2020, at the funeral home. Following the visitation the graveside committal service will be in Maplewood Cemetery of Marion, with Elder David Schwartz presiding. Interment will follow next to his loving wife, Pat. For those who prefer, memorial contributions may be made to “Hospice of Southern Illinois”. Memorial contributions may be mailed in care of Wilson-McReynolds Funeral Home, 900 N. Court Street, Marion, IL 62959. Memorial contribution envelopes will also be available at the funeral home. DUE TO HEALTH CONCERNS RELATED TO THE COVID-19 VIRUS AND BY THE SIGNING OF EXECUTIVE ORDER BY THE ILLINOIS GOVERNOR, if you are planning on attending the visitation or graveside committal service it is REQUIRED you wear a mask and social distance yourself from others. For additional information call the funeral home at 618-993-2131.

The family of Jacob "Jay" William Rix created this Life Tributes page to make it easy to share your memories.

Send flowers to the Rix family.