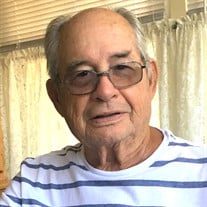 James Arthur Campbell, 83, passed away at 2:10 PM, November 24, 2020 in SIH Herrin Hospital at Herrin, IL. James was born in Johnston City, IL, April 20, 1937 to Lawrence and Lessie Lee Campbell. He married Patricia Ann Green on May 19, 1957 at the First Baptist Church, Marion, IL. Jim is survived by his sons Mark and Jonathan, daughter, Jamie (Robert) Arnold, and grandchildren Kaleb and Rachel Arnold. Jim was a 1955 graduate of Marion High School and a member of the First Baptist Church. He joined the US Navy after graduation and remained active in the Reserves until 1987, retiring with the title of Senior Chief. While active in the Navy, he served as an electrician on USS Rushmore. After his return to Marion, Jim worked for 25 years as a cable splicer at General Telephone & Electronics Corporation (GTE). He became a business representative for the International Brotherhood of Electrical Workers (IBEW), Local Union 702 in 1985, where he retired in June 1999. In June of 2020, he was honored for being a 60-year member of the IBEW. Jim was outgoing and well-known throughout the area. He was an avid learner who loved spending time with friends and family. He was passionate about history, politics, traveling, and gardening. He enjoyed collecting Dickens’ Christmas Village pieces and coins. He was an enthusiast for bird watching, trains, and playing cards. Jim was preceded in death by his wife, Patricia Ann Green Campbell, his parents, father- and mother-in-law, Ralph Carr and Violet Ellis Green, brother, Bob (Vera) Campbell, sister, Lois (Raymond) Browder, brother-in-law, Robert Holderfield, and sister, Norma Wilcox. In addition, he is survived by brother John (Barbara) Campbell, sister, Shirley Holderfield, sister, Virginia (Leon) Langan, brother-in-law Jerry Wilcox, and several nieces and nephews. Interment will be at a later date in the Campbell plot at Maplewood Cemetery, Marion, IL. In lieu of sending flowers, memorial contributions can be made to the SIH Foundation. For more information call the funeral home at 618-993-2131

The family of James Arthur Campbell created this Life Tributes page to make it easy to share your memories.

Send flowers to the Campbell family.