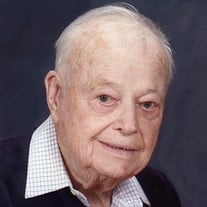 James C. “Jim” Mattox, age 94, of Marion, IL passed away peacefully at 7:10 p.m. on Friday, August 5, 2016, in the Parkway Manor Care Center of Marion. He was born on Monday, May 8, 1922, in Marion, the son of Clarence B. and Lillie G. (Overbey) Mattox. Jim answered the call of this nation by enlisting into the United States Navy during WW II and also served in the United States Air Force during the Korean War. After his period of faithful service during both wars he was honorably discharged. He was united in marriage to Helen M. Chamness on Tuesday, June 17, 1947, in Piggott, AR and together they shared over 65 years of marriage until her death came on Tuesday, July 10, 2012. His working career was as an electrical worker. Early in his career he worked for Oil Field Electric in West Frankfort, IL. He later began working in power line construction for R.E.A. Power Co-op for many years and also worked on other power line construction jobs throughout Southern Illinois. After many years in the electrical field he decided to retire and enjoy his time with his family. Jim was a longtime active member of the Second Baptist Church of Marion where he and served as a deacon for many years. He also was a member of the Crusaders Sunday School Class and the Golden Agers Fellowship Group both of the church. He also was a member of Fellowship Masonic Lodge No. 89 A.F. & A.M. of Marion. In his spare time he enjoyed playing the saxophone and fiddle, listening to gospel and country music and in his earlier years spending time outdoors hunting and fishing. Jim loved his family and enjoyed the many times they gathered together. The many memories that were created will now be cherished by those he leaves behind. He is survived by his son and daughter-in-law, Kent and Marty Mattox of Marion; two grandsons, Aaron Kenton Mattox and his wife Saeward of Benton, IL and Nathan Scott Mattox and his wife Chloe of Jonesboro, AR; sister, Aileen Cover of Marion, several nieces and nephews, other extended family and many friends. He was preceded in death by his parents, wife and sister, Joan S. Hatton. Arrangements for James C. “Jim” Mattox were entrusted to Wilson-McReynolds Funeral Home, 900 N. Court St., Marion, IL. The visitation was from 11:00 a.m. until 1:00 p.m. on Monday, August 8, 2016, at the funeral home. During the time of visitation a “Reflection of Life” DVD Memorial Tribute featuring special people places and events of Jim’s life was presented to the family and friends. Following the time of visitation the funeral service was at 1:00 p.m. with Rev. Mark Mohler presiding. Comments of memory were presented by Danny Ward; son, Kent Mattox and grandsons, Aaron and Nathan Mattox. The prelude and postlude musical selections were presented by pianist Shirley Lantrip. Special vocal musical selections presented during the service were “I’ll Fly Away”, “Beulah Land” and “How Great Thou Art” all by Danny Ward with pianist, Shirley Lantrip accompanying. Interment followed next to his wife in Rose Hill Cemetery of Marion. Pallbearers were Randy Palmowski, Tom Hartwell, Dennis Blankenship, Tom Van Horn, Harold Collier and Mike Blades. Following the committal service at the cemetery the family and friends gathered at Second Baptist Church for a meal and continued time of fellowship and support. For those who preferred, memorial contributions were made to “Second Baptist Church Building Fund” and mailed in care of Wilson-McReynolds Funeral Home, P.O. Box 370, Marion, IL 62959. Memorial envelopes were available at the funeral home. For additional information please contact the funeral home by calling 618-993-2131.

The family of James C. "Jim" Mattox created this Life Tributes page to make it easy to share your memories.