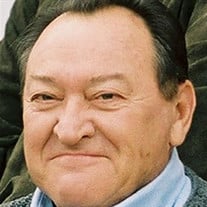 James R.E. “Bob” Higgins, Sr., age 75, of Creal Springs, IL, the Lake of Egypt area, passed away at 8:30 p.m. (Eastern Time) on Tuesday, December 9, 2014, in the Tucker Hospice House of Kannapolis, NC. He was born on Thursday, June 22, 1939, in Bluford, IL of Jefferson County the son of Marcella Higgins. Bob attended school in Mt. Vernon and was a graduate of Mt. Vernon High School in 1957. After graduation he answered the call of this nation by enlisting into the United States Navy in 1957, beginning his long 20 year career. He was honorably discharged and retired from the Navy in 1977, with the rank of Master Chief Petty Officer. After his discharge he began his private working career that included working for several different companies beginning with IBM as a Field Engineer in Denver, CO and later in Palo Alto, CA and later as Senior Instructor of International Systems for Sperry Univac of Eagan, MN. After that he began working for Lockheed Martin Corp. of Linthicum, MD from 1980 thru 1988 and then in 1988 began working for Honeywell Corp. of Chesapeake, VA until 1995 as a Program Manager and Site Manager. In 1996, toward the end of his career he went back with Lockheed Martin Corp. of Sunnyvale, CA as their Senior Program Manager with 383 people that he was responsible for until his retirement in 1999. After his retirement he moved to the Lake of Egypt in the summer of 1999. Bob was united in marriage to Janet Lee Conaway on Friday, January 1, 1982, in Apple Valley, MN and together they have shared over 23 years of marriage until her death on Saturday, June 4, 2005. During their 23 years together they enjoyed trips abroad to Europe and Australia and many wonderful motorcycle trips. He was a member of Cornerstone Baptist Church of Marion, IL. Some of his other memberships included the Fleet Reserve Association, at large member of the American Legion, at large member of the Veteran’s of Foreign Wars and a member of the Christian Motorcycle Association of Carterville, IL. He is survived by his daughter, Patricia Higgins of Concord, NC; son, James R. E. Higgins, Jr. of Concord, NC; two grandchildren, C.J. and Jessica Higgins of Concord, NC; three brothers and one sister-in-law, Earl Hale of Royal Oaks, CA, Joe Fico of Bonnie, IL, and Darrell and Cindy Fico of Jupiter, FL; two sisters and one brother-in-law, Betty and Lester Baltzell and Annabelle Fico all of Bonnie, IL, other extended family and many friends. He was preceded in death by his mother, stepfather; three brothers, Paul Edward Hale who was a sergeant in the Army and killed in Vietnam in 1967, Michael Fico, and Ray Fico. Arrangements for James R.E. “Bob” Higgins, Sr. were entrusted to the Wilson-McReynolds Funeral Home, 900 N. Court Street, of Marion, IL. The memorial service was at 2:00 p.m. on January 18, 2015, at Wilson-McReynolds Funeral Home with Rev. Chad Nalley presiding. The prelude and postlude musical selections were recorded instrumental country western selections. Special vocal musical selection presented during the service was “Wish You Were Here” by Kenneth Gant with recorded accompaniment. The service concluded after the presentation of the flag with the recorded instrumental musical selection “Anchors Aweigh”. Interment followed later in Camp Ripley National Cemetery of Little Falls, MN. For those who preferred, memorial contributions were made to either “Cornerstone Baptist Church” in Marion or the “Christian Motorcycle Association”. Memorial contribution envelopes were available at the funeral home or were mailed in care of Wilson-McReynolds Funeral Home, P.O. Box 370, Marion, IL, 62959. For additional information please contact the funeral home by calling 618-993-2131.

The family of James R.E. "Bob" Higgins Sr. created this Life Tributes page to make it easy to share your memories.