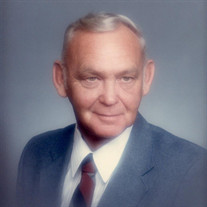 James “Tapper” Gulledge, age 88, passed away suddenly at 12:58 p.m. on Wednesday, July 29, 2020, in Herrin Hospital of Herrin, IL. He was born on Monday, October 12, 1931, in Marion, IL, the son of Charles and Vera Gulledge. James answered the call of this nation by enlisting into the United States Navy and after his period of faithful service he was honorably discharged with a rank of Seaman Recruit. He then enlisted into the United States Coast Guard and after his period of faithful service was honorably discharged in 1960, with a rank of Engineman, Second Class. He was united to Toni Pedigo on Tuesday, March 31, 1981, in Marion, IL, and together they have shared over 40 wonderful years of marriage together. His working career was with Southern Illinois University of Carbondale, IL, as a Custodial Supervisor of Buildings until his retirement, over 20 years ago. In his spare time, he enjoyed spending time in the outdoors, fishing, hunting and he loved to play golf. His love for animals was unsurmountable, and all of his animals were well taken care of, especially his faithful companion and loving dog, Hobert. He was actively involved in the American Legion Post No. 147 and the Heyde-Pillow VFW Post No. 1301 both of Marion, IL. Jim was a proud member of the Shriner’s in South Bend, IN, and in Marion, IL, and became a 32nd degree Mason in Marion, where he was always involved with their fish fry’s, until his health declined. He is survived by his wife, Toni Gulledge of Carterville, IL; daughter, Patricia Kerr of Marion, IL, other extended family and many friends. There have been many special memories created that will be cherished by those he leaves behind. He was preceded in death by his son, Jimmy Gulledge; brother, Bob Gulledge; sister, Ruthanne Bushemi; parents, Charles and Vera Gulledge and son-in-law, Louis A. Kerr. Arrangements were entrusted to Wilson-McReynolds Funeral Home, 900 N. Court St., Marion. DUE TO HEALTH CONCERNS RELATED TO THE COVID-19 VIRUS AND BY THE SIGNING OF EXECUTIVE ORDER BY THE ILLINOIS GOVERNOR, it was recommended if you were planning on attending the visitation or service please wear a mask and social distance yourself from others. The time of visitation was from 9:30 a.m. until 11:00 a.m. on Saturday, August 1, 2020, at the funeral home. Following the time of visitation, the funeral service was at 11:00 a.m. with Pastor Jim Jenkel presiding. At the start of the funeral service a walk through was performed by members of the Williamson County Shriner’s. The prelude and postlude were recorded piano musical selections. Special vocal musical selections presented during the service were, “Amazing Grace” by Elvis Presley and “Silver Wings” by Merle Haggard. Interment followed at Rose Hill Cemetery of Marion, IL, near his son. Pallbearers were Eddie Wiseman, Ken Blumenstock, Colter Deaton, Rusty Deaton, Donnie Healsly, George Tregoning and Matt Strobel with special Honorary Pallbearer, Jerald Kobler. Military honors were accorded at cemetery by members of Heyde-Pillow V.F.W. Post No. 1301 of Marion, and members of the United States Coast Guard Funeral Honors Burial Detail. The family requested, in lieu of customary gifts of remembrance, memorial contributions be made to “Shriners Hospital,” “Finding Forever Animal Rescue” or “St. Jude’s Children’s Hospital.” Memorial contributions were mailed to the Wilson-McReynolds Funeral Home, 900 North Court St., Marion, IL 62959. Memorial contribution envelopes were available at the funeral home. For additional information please call 618-993-2131.

The family of James "Tapper" Gulledge created this Life Tributes page to make it easy to share your memories.

Send flowers to the Gulledge family.