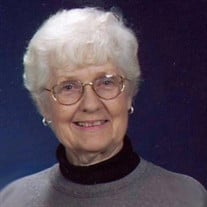 Janet Rae Jones, age 84, of rural Creal Springs, IL, passed away peacefully with her family by her side at 3:47 p.m. on Monday, April 20, 2020, at her home. She was born on Tuesday, August 6, 1935, in Brokaw Hospital of Normal, IL, the daughter of Raymond Valentine and Margaret Ellen (Spitzer) Murray. Janet attended school in Normal and was a graduate of Normal High School Class of 1953. She met the love of her life during high school and was united in marriage to Donald Edward Jones on Saturday, January 29, 1955, in Saint Patrick Catholic Church of Merna, IL and together they have shared over 65 years of marriage. She was a member of the First Christian Church-Disciples of Christ of Marion and also a member of the Christian Women’s Fellowship of the church. Janet enjoyed raising her children, seeing to the needs of her family and managing her home. She also would help her husband on the farm with many different projects. She enjoyed living in the country, spending time outdoors and watching her birds. Janet also was an avid reader and found enjoyment sitting by the window enjoying the scenery outdoors with one of her favorite books in her hand. Though she always busy with projects and special interests, one of the most important parts of her life was spending time with her family, especially her grandchildren. She was always interested in all their many different activities. The memories that have been created will now be cherished by those she leaves behind. She is survived by her husband, Donald E. Jones of Creal Springs, IL; daughter and son-in-law, Lisa Bell and Steve “Harpy” Harpstrite of Marion, IL; three grandchildren, Kaci Dunn of Marion, IL, Dalton Smothers of Marion, IL and Michael Jones and wife, Kamey of Saybrook, IL; three great grandchildren, Hunter Dunn of Marion, IL and Dylan Jones and Makayla Jones both of Saybrook, IL; two brothers and sisters-in-law, Thomas and Connie Murray of Harrisburg, IL and Ronald and Dorothy Murray of Bloomington, IL; daughter-in-law, Marla Jones of Saybrook, IL, other extended family and many friends. She was preceded in death by her parents and son, Edward Jones in July of 2015. Arrangements have been entrusted to Wilson-McReynolds Funeral Home, 900 N. Court St., Marion. DUE TO HEALTH CONCERNS RELATED TO THE COVID-19 VIRUS AND BY THE SIGNING OF EXECUTIVE ORDER BY THE ILLINOIS GOVERNOR, there will not be visitation or funeral services currently. Interment will be at a later date in Union Cemetery located near Arrowsmith, IL, in McClean County. For those who wish, memorial contributions may be made to either or both; “First Christian Church” and/or “Hospice of Southern Illinois”. Memorial contributions may be mailed to the Wilson-McReynolds Funeral Home, 900 North Court St., Marion, IL 62959. For additional information call the funeral home at 618-993-2131.

The family of Janet Rae Jones created this Life Tributes page to make it easy to share your memories.