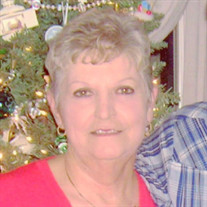 Janet K. Malone, age 73, of rural Goreville, IL passed away peacefully with her family by her side at 12:35 p.m. on Sunday, January 28, 2018, at the home of her sister, Sandy, of rural Pittsburg, IL. She was born on Friday, November 3, 1944, at the Union Hospital in West Frankfort, IL, the daughter of Earnest George and Reatha Katherine (Morris) Hearn. She was united in marriage to Hubert Malone, Jr. on Saturday, May 3, 1986, in Carrier Mills, IL , and together they shared over 21 years of marriage until his death on Monday, October 29, 2007. Janet was a homemaker the majority of her lifetime managing her home and seeing to the needs of her family. She of the Baptist faith. Early in her lifetime she lived on a farm and was actively involved working and managing it, putting out a large garden to be used by the family. In her spare time she enjoyed spending time outdoors, gardening, planting flowers and trees, going to rummage sales, watching old western movies, especially those featuring John Wayne, listening to Elvis Presley music and dancing with her sister Karen. She also loved animals, especially horses, having had one particular horse for 31 years. She often said there was nothing better than “Kissing a Horse on the Lips.” She was a loyal supporter of St. Jude Children’s Hospital on a monthly basis. Her family loved her very much and always wanted to help her with anything she needed. As her health declined and had more needs daily, her brother-in-law, Doug, especially helped her with going to dialysis 3 times a week and many other needs. Janet loved her family and was a “Special Nana to Jaxon.” She was always interested in all of their many activities and enjoyed the many times they all would be together. The many memories that have been created will now be cherished by those she leaves behind. She is survived by her brother, Roger G. Hearn of Marion; four sisters and brothers-in-law, Jodi and Robert Moore and Sandy and Tim Wilkins all of Pittsburg, Kimberly and Doug Cross and Pam and Jeff Wilson all of Marion; special cousin and friend, Donna Bloodworth of Marion, other extended family, and many friends. She was preceded in death by her parents; two sisters, Karen A. McGee and Kathy R. Price and brother, Gary E. Hearn. Arrangements for Janet K. Malone were entrusted to Wilson-McReynolds Funeral Home, 900 N. Court St., Marion. The visitation was from 11:00 a.m. until 2:00 p.m. on Friday, February 2, 2018 at the funeral home. During the visitation a “Reflection of Life” DVD Memorial Tribute was presented to the family and friends and featured special people, places, and events of Janet’s life. Following the time of visitation the funeral service was at 2:00 p.m. with Pastor John Burnett presiding. The prelude and postlude musical selections were presented by Linda Burnett. Special recorded vocal musical selections preseneted during the service were, “Why Me Lord” by Kris Kristofferson, “Seven Spanish Angels” by Willie Nelson and Ray Charles, “Serenaded by Angels” by Kirk Talley, and “Just a Rose Will Do” by The Marksmen Quartet. Special vocal musical selection presented during the service was “How Great Thou Art” by Linda Burnett who accompanied herself on the piano. During the service special comments of memory were presented by Janet’s sister, Kim and niece, Lindsey. Interment followed next to her husband in Maplewood Cemetery of Marion. Those serving as pallbearers were Tim Wilkins, Doug Cross, Kyle Couty, John Wilkins, Seth Shepherd, and Eugenio Martinez. Honorary pallbearers were Tyler Wilkins and Gage Wilkins. During the graveside committal service special scripture was read by Gage Wilkins. Following the service at the cemetery, family and friends gathered at Sandy’s home for a meal and continued time of fellowship and support. For those who preferred, memorial contributions were made to “St. Jude Children’s Hospital” and mailed in care of Wilson-McReynolds Funeral Home, 900 N. Court Street, Marion, IL 62959. Memorial envelopes will be available at the funeral home. For additional information call the funeral home at 618-993-2131.

The family of Janet Kay Malone created this Life Tributes page to make it easy to share your memories.

Send flowers to the Malone family.