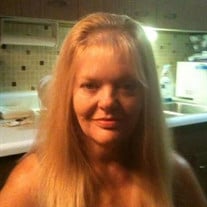 Janice N. (Ferguson) Anderson, age 58, of Marion, IL, formerly of Memphis, TN, passed away at 6:21 p.m. on Friday, May 1, 2015, in Herrin Hospital of Herrin, IL. She was born on Tuesday, June 19, 1956, in Memphis, TN the daughter of James Nelson and Mary (Burbank) Ferguson. Janice was united in marriage to Michael A. Anderson on Tuesday, July 5, 2005, in Herrin, IL and together they shared nearly ten years of marriage. Her working career in the Marion, IL area was with Aisin, working on assembly in the Locks Department. Janice was a member of the Church of Christ of Herrin, IL and loved the Lord. She was a long time supporter of St. Jude Children’s Hospital in Memphis, TN. In her spare time she enjoyed being around horses and spending time with her family. The many memories that have been created will now be cherished by those she leaves behind. She is survived by her husband, Michael A. Anderson of Marion, IL; grandson, Austin Cheyenne Wilbanks of Byhalia, MS; sister, Beth Fazen of Colorado Springs, CO; two brothers and sisters-in-law, Matt and Denise Ferguson of Olive Branch, MS and Walt and Tracy Ferguson of Bartlett, TN; two step daughters, Christine Burch and husband Paul of Marion, IL and Dakota Anderson of Carbondale, IL; step son, Andy Anderson and his wife Carrie of Fenton, MO; three step grandchildren, Sophie Anderson and Mackenzie Robertson both of Fenton, MO and Michael Burch of Marion, IL, other extended family and many friends. She was preceded by her parents and daughter, Kelly Herron Wilbanks on September 20, 2006 at the age of 27. Arrangements for Janice N. (Ferguson) Anderson have been entrusted to the Wilson-McReynolds Funeral Home, 900 N. Court Street, of Marion, IL. The graveside service will be at 2:00 p.m. on Wednesday, May 6, 2015, at Byhalia Cemetery in Byhalia, MS with Evangelist Adam Shanks presiding. Interment will follow next to her daughter, Kelly. Those wishing to attend the graveside service should gather at the cemetery prior to 2:00 p.m. For those who prefer, memorial contributions can be made to “St. Jude Children’s Hospital” and mailed in care of Wilson-McReynolds Funeral Home, P.O. Box 370, Marion, IL 62959. Memorial envelopes will be available at the funeral home and the cemetery. For additional information please contact the funeral home by calling 618-993-2131.

The family of Janice N. Anderson created this Life Tributes page to make it easy to share your memories.