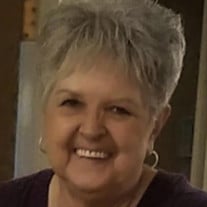 Janice B. Russell-Akin, age 81, of Marion, IL, passed away at 2:50 a.m. on Tuesday, November 10, 2020, in Heartland Regional Medical Center of Marion. She was born on Saturday, March, 11, 1939, in rural Marion, IL, the daughter of William Esco “Buster” Cross and Ivalee (Taylor) Cross. She was first united in marriage to James P. Russell and this union was blessed with two children; Jimmy and Debbie. She later was united in marriage to Vernon Akin in September of 2005, in Johnston City, IL, and together they have shared over 15 years of marriage. Janice was a member of Abundant Life Assembly of God Church of Marion. In her spare time she enjoyed playing the card game Uno and Bingo. While her mother was at the local care center she enjoyed helping other residents when she was visiting her mother. She enjoyed cooking and the many family gatherings and everyone looked forward to having her “Skillet Fried Chicken”. The many memories that have been created will now be cherished by those she leaves behind. She is survived by her husband, Vernon Akin of Marion; son and daughter-in-law, Jimmy and Gayla Russell of Marion; daughter and son-in-law, Debbie and Kevin Crompton of Marion; six grandchildren, Jimmy Russell III, Brittani Saylor, Talley Saylor, Taylor Crompton, Kaleb Crompton and Kelsey Crompton; four great grandchildren, Zander Saylor, Reese Borders, Daxton Borders and Maddux Hill; sister, Barbara Deanne Kendall of Marion; sister-in-law, Kim Whitehead of Carrier Mills, IL; eight step children, Vernon Akin Jr. and his wife, Debbie, Veronica Younger and her husband, Danny, Vicky Gray and her husband, Mike, Victor Akin and his wife, Kim, Vincent Akin and his wife, Robin, Virgil Akin and his wife, Rose, Vernadean Akin and Kaiden Akin; seventeen step grandchildren, forty two step great grandchildren, eight great-great step grandchildren, other extended family and many friends. She was preceded in death by her parents; two brothers, Jim and Bill Cross and infant sister, Winnona Gail Cross. Arrangements were entrusted to Wilson- McReynolds Funeral Home, 900 N. Court St., Marion. The visitation was from 11:00 a.m. until 1:00 p.m. on Saturday, November 14, 2020, at the funeral home. During the time of visitation a “Reflection of Life” DVD Memorial Tribute featuring special people, places and events in Janice’s life was presented to the family and friends. Following the time of visitation the funeral service was at 1:00 p.m. with her son, Pastor Jimmy Russell presiding. The prelude and postlude musical selections were presented by pianist, Mark Bennett. Special vocal musical selections presented during the service were “Amazing Grace” and “Sheltered In the Arms of God” both by Janice’s daughter-in-law, Gayla Russell with pianist, Mark Bennett accompanying. Interment followed in the Egyptian Memorial Gardens Cemetery of Energy, IL. Pallbearers were Kevin Crompton, Zander Saylor, Virgil Akin, Daxton Borders, Kaleb Crompton, Tim Riley and Dave Frick. For those who preferred, memorial contributions were made to “Abundant Life Assembly of God”. Memorial contributions were mailed in care of Wilson-McReynolds Funeral Home, 900 N. Court Street, Marion, IL 62959. For additional information call the funeral home at 618-993-2131.

The family of Janice B. Russell-Akin created this Life Tributes page to make it easy to share your memories.

Send flowers to the Russell-Akin family.