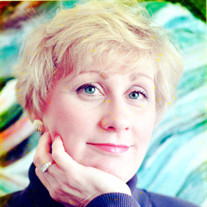 Janice M. Southard, age 64, of Marion, IL, passed away peacefully at her home in Marion surrounded by her family at 6:35 p.m. on March 7, 2017. She was born in Mountain Home Air Force Base, ID on Tuesday, April 1, 1952, the daughter of Henry and Shirley (Spotanski) Marganski. Janice grew up and attended school in St. Louis, MO. She continued her education and received her Bachelors’ Degree in Art Education, Studio Art, and Education. She was united in marriage to Kent Southard on Friday, June 28, 1974, in St. Louis, MO, and together they shared over forty-two years of marriage. Janice was a lifelong member of St. Stanislaus Kostka Roman Catholic Church of St. Louis. Janice was an accomplished artist. For the past twelve years she was an art instructor in the Herrin, IL High School and for the previous eight years was an art instructor at the Goreville, IL High School. She enjoyed working with her many students and directing them and foraging for objects in their projects. She was especially proud of her student’s achievements. She and Kent enjoyed playing golf, traveling the country, and traveling to other countries including Poland, England and Mexico. The memories that have been created will now be cherished by her family and friends. She is survived by her husband, Kent Southard of Marion and her two sons and daughter-in-laws, Alan and Margaret Southard of Grosse Pointe, MI and David and Summer Southard of Sierra Vista, AZ; two grandchildren, Adella Southard and Ian Southard both of Grosse Pointe, MI; sister and brother-in-law, Susan and Roman Kaminski of St. Louis, MO; other extended family and many friends. She was preceded in death by her mother Shirley Marganski. Arrangements for Janice M. Southard have been entrusted to Wilson-McReynolds Funeral Home, 900 N. Court St., Marion, IL. The time of visitation will be from 4:00 p.m. until 7:00 p.m. on Friday, March 10, 2017 at the funeral home. Following the time of visistation, the funeral service will be at 7:00 p.m. Friday evening with Fr. Marek Bozek of St. Louis, MO presiding. For those who prefer, memorial contributions may be made to, “Hospice of Southern Illinois” and mailed in care of Wilson-McReynolds Funeral Home, 900 N. Court Street, Marion, IL 62959. Memorial envelopes will be available at the funeral home. For additional information please call the funeral home at 618-993-2131.

Janice M. Southard, age 64, of Marion, IL, passed away peacefully at her home in Marion surrounded by her family at 6:35 p.m. on March 7, 2017. She was born in Mountain Home Air Force Base, ID on Tuesday, April 1, 1952, the daughter of Henry... View Obituary & Service Information

The family of Janice M. Southard created this Life Tributes page to make it easy to share your memories.

Send flowers to the Southard family.