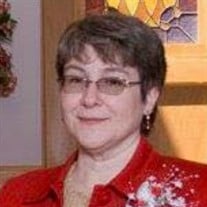 Janis Ree Marchal, age 60, of Marion, IL passed away peacefully at 9:35 a.m. on Saturday, March 3, 2018, at her home in Marion. She was born on December 3, 1957, in Marion, IL the daughter of Charles Gilbert “Gib” and Velma Marie (Rose) Wolaver. Janis attended school in Marion and was a graduate of Marion High School Class of 1975. She continued on with her education by attending Southern Illinois University of Carbondale, IL where she received a Bachelor’s of Science Degree in Biology. She was united in marriage to Richard Lee Marchal on February 13, 1985, in Marion and together they have shared over 33 years of marriage. Janis began her working career as a Lab Technician for Herrin Hospital where she worked for 23 years until her health forced her to retire. She later began working in August of 2003, at Southern Illinois University of Carbondale, IL with the Microbiology Department as a Natural Science Tech Assistant and was still currently working at the time of her death. Janis was of the Protestant faith. She also was a member of the AARP and the Friends of the Marion Carnegie Library. She was an avid reader, enjoyed working jigsaw puzzles, drawing and writing poetry. She also was a fabulous creator of stories and enjoyed role-playing and making these stories come to life with people in groups. She loved learning about the past and dreamed of what the future was to be. She loved her family, especially her grandchildren, and was always interested in all of their many activities. Those she leaves behind will now cherish the many memories that have been created. She is survived by her husband, Richard L. Marchal of Marion; two daughters and sons-in-law, Heather and Dan Rinderer of Breese, IL and Daniella and Bobby Hewitt of Christopher, IL; three sons and daughters-in-law, David and Stephanie Marchal of McKinney, TX, Phillip and Yvonne Marchal of Carterville, IL and Bryan and Vanessa Marchal of Marion, fourteen grandchildren; great grandson, Phillip Miner; brother and sister-in-law, Greg and Carol Wolaver of Marion; sister and brother-in-law, Jo Ellen and Joe Middleton of Hartwick, NY, other extended family and many friends. She was preceded in death by her parents and grandson, Wesley Marchal. Arrangements for Janis R. Marchal have been entrusted to Wilson-McReynolds Funeral Home, 900 N. Court St., Marion. In accordance with Janis’ wishes an informal time of gathering and remembering will be from 6:30 p.m. until 7:30 p.m. on Saturday, March 10, 2018, at the funeral home. Everyone is invited to come and share the many memories of Janis during this special time. For those who prefer, memorial contributions may be made to “Big Cat Rescue” and mailed in care of Wilson-McReynolds Funeral Home, 900 N. Court Street, Marion, IL 62959. Memorial envelopes will be available at the funeral home. For additional information call the funeral home at 618-993-2131.

The family of Janis Ree Marchal created this Life Tributes page to make it easy to share your memories.