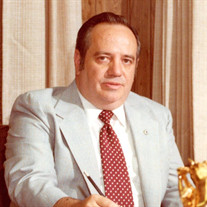 Jerry M. Blue, age 89, of Creal Springs, IL, the Lake of Egypt community passed away at 2:08 a.m. on Friday, October 2, 2015, at his home with his family at his side. He was born on Sunday, April 11, 1926, in Ava, IL the son of Frank and Eva (Callahan) Blue. Jerry was a graduate of Ava High School Class of 1942. He answered the call of the nation by enlisting into the United States Marine Corps and served during World War II. After his period of faithful service he was honorably discharged in 1946. Jerry was united in marriage to Kathleen M. Carlson on Thursday, January 16, 1986, in Paducah, KY and together they have shared the last twenty-nine years of marriage. At the time of his retirement, Jerry was the chief executive officer for the United Food and Commercial Workers Local Union No. 534 in Belleville, IL. After his retirement, Jerry moved to the Lake of Egypt where he enjoyed fishing and spending time on the lake and he was a great cook and always enjoyed cooking and grilling out for his family and friends. He is survived by his wife, Kathleen M. Blue of Creal Springs, IL, Lake of Egypt community; daughter and son-in-law, Marsha and Bruce Thackrey of Mt. Vernon, IL; son and daughter-in-law Allen and Linda Blue of Scottsdale, AZ; three stepdaughters, Shari Anthony and husband Michael of Mascoutah, IL, Darla Woodard of Carbondale and Michelle Harris and husband Michael of Arcadia, OK, four step grandchildren, other extended family and many friends. He was preceded in death by his parents; daughter, Elizabeth Ann Austin; sister, Beatrice Boucher and two brothers, Ralph Blue and Allen Blue. Arrangements for Jerry M. Blue have been entrusted to Wilson-McReynolds Funeral Home, 900 N. Court St., Marion, IL. According to Jerry’s wishes cremation will be accorded with a memorial service at the Lake of Egypt at a later date. For those who prefer, memorial contributions can be made to “ALS Association” and mailed in care of Wilson-McReynolds Funeral Home, P.O. Box 370, Marion, IL 62959. Memorial envelopes will be available at the funeral home. For additional information, to leave a “condolence of memory” or “light a candle in memory” please visit our website at www.wilsonmcreynolds or call the funeral home at 618-993-2131.

The family of Jerry M. Blue created this Life Tributes page to make it easy to share your memories.

Send flowers to the Blue family.