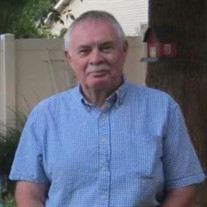 Jerry D. Kuykendall, age 72, of Tunnel Hill, IL, passed away at 11:45 p.m. on Monday, September 6, 2021, in Herrin Hospital. He was born on May 19, 1949, in Carbondale, IL, the son of Joseph Benton “J.B.” and Evelyn Pauline (Pate) Kuykendall. Jerry attended school in Marion, and was a graduate of Marion High School Class of 1967. After graduation he continued his education by attending at Southern Illinois University of Carbondale. He then answered the call of this nation by enlisting into the United States Air Force, serving in Southeast Asia in Thailand. After his period of faithful service, he was honorably discharged. He then resumed his education, attending at Fresno State University of Fresno, CA, where he received his Bachelors of Arts Degree in Biology. While in the Fresno area he met Linda Johanning, and they were united in marriage on December 29, 1972, in Belmont, CA, and together they have shared nearly 49 years of marriage. Jerry worked for the U.S. Fish and Wildlife Service for many years serving as a Federal Law Enforcement Officer. During this time, Jerry and Linda lived in many states throughout the country including the north, south, Midwest, and east and west coasts. Toward the end of his career, he became the National Coordinator for the Federal Law Enforcement Training Center, known as FLETC, in Glynco, GA. He served in this position from 1998 until 2003. After he left that position, he moved back to southern Illinois and officially retired from Federal Law Enforcement in 2004. Living in the country in Johnson County, he took on cattle farming for about 7 years before he and Linda began missionary work in Honduras. He is a member of The Roads Church of Norris City, IL and served on the Board of Directors for Cornerstone Foundation, supporting the Hospital Loma de Luz in Balfate, Honduras. Jerry loved the outdoors, traveling, operating farm tractors, cattle farming, shooting his guns, living in the country, being a missionary, supporting missionaries, and top of the list spending as much time as he could with his wife Linda. Jerry was a proud supporter of law enforcement and the United States Armed Forces. He is survived by his wife, Linda Kuykendall of Tunnel Hill, IL; son, Christopher Kuykendall of Sedalia, MO; mother, Evelyn Pauline Kuykendall of Marion; two sisters, Jane A. Anderson and husband, Kenneth of Marion and Jennifer L. Kubow and husband, Philip of Nashotah, WI; aunt, Phyliss Tunning of Cincinnati, OH; brother-in-law, Kent McCollough of Louisville, KY, a host of nieces and nephews, other extended family and many friends. He was preceded in death by his father and two sisters, JoEllen McCollough and Barbara Koelker. Arrangements were entrusted to Wilson-McReynolds Funeral Home, 900 North Court Street, Marion, IL. The visitation was on Saturday, September 11th, from 4:00 p.m. to 7:00 p.m. at the funeral home. Law enforcement honors were accorded during the visitation by members of the U.S. Fish and Wildlife Service Honor Guard. During the time of visitation, a “Reflection of Life” DVD Memorial Tribute featuring special people, places and events in Jerry’s life was presented to the family and friends. The funeral service was at 2:00 p.m. on Sunday, September 12, 2021, at Wilson-McReynolds Funeral Home with Pastor Chad Everett presiding. The service began with Piper Paul Thompson piping a medley of tunes. Also, during the service Jerry’s friend, Dr. Jeff McKenney presented special comments of memory. Special recorded vocal musical selections presented during the service were; “Raise a Halleluiah” by Bethel Music, “Know (Be Still)” by Jeremy Riddle and “Ain’t No Grave” by Bethel Music. Interment followed in Rose Hill Cemetery of Marion, IL. Pallbearers were Geoff Donaldson, Isaac Donaldson, Quinn Laird, Rob Reynolds, J.D. Barter and Byron Farthing. As the casket arrived at the cemetery Piper Paul Thompson piped “Amazing Grace” as the casket was carried to the grave. Military honors were accorded at the graveside by members of Marion VFW Heyde Pillow Post No. 1301 Funeral Honors Detail and members of the United States Air Force Funeral Honors Detail. After the military honors Piper Paul Thompson piped “Going Home.” Following the committal service at the cemetery the family and friends gathered at the Boy Scout Cabin in Marion, for a meal and continued time of fellowship and support. The family requested for those who preferred, memorial contributions be given to either or both: “Cornerstone International”, a missionary sending agency in Wilmore, KY and/or “Cornerstone Foundation”, a missionary organization supporting the many works of Hospital Loma de Luz in Belfate, Honduras. Both are organizations that support missionaries around the world that Jerry and Linda also support. For additional information call the funeral home at 618-993-2131.

The family of Jerry Dale Kuykendall created this Life Tributes page to make it easy to share your memories.

Send flowers to the Kuykendall family.