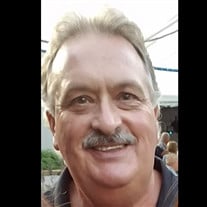 Jerry A. Murphy, age 59, of rural Marion, IL, passed away surrounded by his family at 12:15 a.m. on Friday, June 16, 2017 at his home. He was born on Wednesday, April 23, 1958, in Valparaiso, IN, the son of Charles Dale and Evelyn Joyce (Owens) Murphy. Jerry attended school in Marion and was a graduate of Marion High School Class of 1976. Over time he continued with his education attending at both John A. Logan College and Rend Lake College. Jerry was a coal miner the majority of his lifetime. He began at Brushy Creek Coal Mine near Harco, IL and worked there for 15 years until the mine closed. He later began working at Consolidated Coal Mine near Sesser, IL for 4 years until that mine closed also. He then started a new career at Southern FS of Harrisburg, IL, working as store manager for 11 years until he retired in 2014. After his retirement he began reading the water meters of the rural area for the New Burnside Water District until his health forced him to quit. He was united in marriage to Lori Lynn Hall on Saturday, June 16, 2012, in the Coal Bank Springs Church located near Dykersburg, IL in Williamson County and together they have shared 5 years of marriage. Jerry was of the Baptist faith. Currently he was serving as financial secretary and member of Local Union No. 2420, District 12, of the United Mine Workers of America. He also was a very active member and had served as Exalted Ruler three times, of the Elk’s Lodge No. 800 of Marion, member of the Masonic Fellowship Lodge No. 39 AF & AM of Marion and member of the Williamson County Shiners of Marion. Jerry was a giving person to others and enjoyed life to the fullest. He was always very jolly, had a happy smile, and loved to tease people. One of his passions was wood working of all kinds, and with this talent was able to help many other people on projects they needed. Jerry also built the home he lived in with the help of his father and brother Wade. In his spare time he enjoyed riding horses, camping, hunting, especially deer and quail, dancing, cooking and catering events and spending time with his two dogs, Millie and Maggie. Jerry loved his family and was always interested in all of their many activities. He loved it when there was going to be a new baby in the family and tried to be one of the first persons to hold them. He enjoyed family and friends getting together and the many memories that have been created will now be cherished by those he leaves behind. He is survived by his father, Dale Murphy of Marion; wife Lori L. Murphy of Marion; two beautiful daughters whom he raised and their husbands, Tiffany and Cory Hilliard and Stephanie and Matt McCaleb all of Marion; son, Tyler Murphy of Galatia, IL; six grandchildren, Lia, Derik, Olivia, Easton, Noah and Haylee all of Marion; sister and brother-in-law, Renee and Dennis Midgett of Marion; two brothers and sisters-in-law, Wayne and Paula Murphy of Marion and Wade and Charla Murphy of Taylorville, IL; mother-in-law, Wanda Spicer of Galatia, IL, other extended family and many friends. He was preceded in death by his mother, Evelyn J. Murphy and father-in-law, Ed Hall. Arrangements for Jerry A. Murphy were entrusted to Wilson-McReynolds Funeral Home, 900 N. Court St., Marion, IL. The visitation was from 4:00 p.m. until 8:00 p.m. on Monday, June19th at the funeral home. During the time of visitation a “Reflection of Life” DVD Memorial Tribute featuring special people, places and events in Jerry’s life was presented to the family and friends. Masonic rites were accorded during the time of visitation at 7:00 p.m. by Masonic Fellowship Lodge No. 89 AF & AM of Marion. The officers were Edwin A. Robinson as Master, Nick Taylor as Secretary, Ryan Menow as Marshall and Bob Russell as Chaplain. The funeral service was at 11:00 a.m. on Tuesday, June 20, 2017, at Wilson-McReynolds Funeral Home with Rev. Jimmy Reynolds and Rev. Gaylon Parks presiding. The Elks Lodge No. 800 of Marion provided the Elk’s Memorial Rite to begin the service. The officers were Randy Patchett as Exalted Ruler, Mitch Strang as Esquire, Randy Jones as Chaplain, Ralph Graham as Esteemed Leading & Lecturing Knight and Ted Clendenin as Esteemed Loyal Knight & Inner Guard. The prelude and postlude musical selections were recorded piano selections. Special recorded vocal musical selections presented during the service were “Daddy’s Hand’s” by Holly Dunn & “Picture Me Without You” by Lori Morgan. Also presented during the service were two additional vocal musical selections; “The Dance” and “The Old Rugged Cross” both by Julie Fosse and David Clark with David accompanying on the guitar. Interment followed in Mount Pleasant Poordo Cemetery, located northeast of Marion in Williamson County. Pallbearers were Kevin Williams, Tyler Murphy, Cory Hilliard, Matt McCaleb, Johnnie Norris, Alan Harris, Andy White and Carl Midgett. Honorary pallbearers were Jerry’s grandsons; Derik and Noah. At the committal service a special poem “Do Not Stand by My Grave and Weep” was presented by Jamie Norris. Following the committal service at the cemetery the family and friends gathered at Jerry and Lisa’s home for a meal and continued time of fellowship and support. For those who preferred, memorial contributions were made to either or both, “Shiners’ Hospital for Children” and “Celtic Hospice” and mailed in care of Wilson-McReynolds Funeral Home, 900 N. Court Street, Marion, IL 62959. Memorial envelopes were available at the funeral home. For additional information please contact the funeral home by calling 618-993-2131.

The family of Jerry A. Murphy created this Life Tributes page to make it easy to share your memories.

Send flowers to the Murphy family.