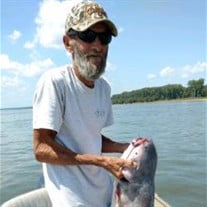 Jerry Dean Sanders, age 65, of the Lake of Egypt near Goreville, IL passed away at 3:06 a.m. on Sunday, May 6, 2018, at his home. He was born on Wednesday, May 21, 1952 in Carbondale, IL, the son of Robert D. “Bob” and Betty Lee (Johnson) Sanders. Jerry attended school in Marion, IL until his senior year. His family then moved to Florida, where his father worked in construction at Disney World, and Jerry graduated from Osceola County High School Class of 1970. He answered the call of this nation by serving in the United States Army from 1972 until the time of his honorable discharge in 1975 with the rank of Sergeant. Jerry was united in marriage to Pamela Jo Kneitz on Saturday, May 18, 1985, in Orlando, FL and together they shared nearly 33 years of marriage. Jerry’s working career was in construction all of his lifetime. He was a partner with Fenstar Inc. that specialized in metal framing construction of housing and commercial businesses until his retirement in 2013. He loved being outdoors, fishing, and hunting, especially duck hunting and cat fishing on the river with his brother, David. He enjoyed spending time with his family and will be missed by all who knew and loved him. He is survived by his wife, Pam Sanders of Goreville; stepson, Michael D. Hewitt of Orlando, FL; two brothers and sister-in-law, Gail L. Sanders and David L. and Laura Sanders all of Marion; two nieces, Hillary Wing and her husband Justin and Lauryn Sanders all of Marion; nephew, Jacob Sanders of Marion; great niece, Madelyn Wing of Marion, other extended family members, and many friends. He was preceded in death by his parents. Arrangements for Jerry Dean Sanders have been entrusted to Wilson-McReynolds Funeral Home, 900 N. Court St., Marion. According to his wishes there will not be any services accorded. For additional information please call the funeral home at 618-993-2131.

The family of Jerry Dean Sanders created this Life Tributes page to make it easy to share your memories.

Jerry Dean Sanders, age 65, of the Lake of Egypt near Goreville,...