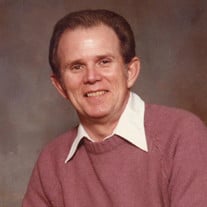 Jerry D. Turner, age 80, of Marion, IL, passed away peacefully at 8:28 p.m. on Friday, November 21, 2014, at the Marion Rehabilitation and Care Center of Marion, IL. He was born on Friday, December 1, 1933, in Marion, IL the son of Vilas E. Turner, Sr. and Eva (Knight) Turner. Jerry attended school in Marion and was a graduate of Marion High School in 1952. He was united in marriage to Dorothy Jean Waldron on Saturday, January 16, 1954, at the Energy Baptist Church of Energy, IL and together they have shared nearly sixty-one years of marriage. Jerry began his working career in road construction in the area and later in 1954, worked for Norge of Herrin, IL. In 1956, the family moved to St. Louis, MO and Jerry began working for a short time with Morgan Linen Company as one of their delivery drivers. He later was offered a job with McDonald-Douglas Aircraft Company which he accepted and worked there for the next several years. Missing his family and Southern Illinois the family moved back to Marion in 1961 and he opened his own business, “Turner’s Interiors” of Marion, IL, specializing in floor covering, paints and decorating products for the home. He owned and operated this business for the next several years until 1976. After that he was a building contractor of homes for other people and himself. Then in 1984, due to health reasons he retired. He was a member of the Community of Faith Church of Marion, IL. He also was a member of the Experimental Aircraft Association of Oshkosh, WI and the Experimental Aircraft Association No. 750 of Southern Illinois. Jerry was a licensed pilot and in his spare time, with the knowledge he had acquired by working at McDonald-Douglas, he pursued his passion of building and then flying experimental aircraft. He has built two experimental aircraft; a Throp T-18 and a Van’s RV-6. He also has owned a Piper Cherokee airplane and restored completely a Bonanza Beachcraft airplane. He enjoyed attending air shows with his planes and has won many awards and also has spent many hours flying small remote controlled planes with the Sky Squires of Marion, IL. He also enjoyed fishing and hunting with his children. Though he always kept busy during his lifetime with work and his other interests the most important part of his life was his family. He always looked forward and enjoyed the times they would all gather together and treasured all the memories that were created. He is survived by his wife, Dorothy J. Turner of Marion, IL; three sons and two daughters-in-law, Jeffrey S. and Elizabeth “Betsy” Turner, Gregory D. and Carmen Turner and James L. Turner all of Marion, IL; daughter and son-in-law, Cheri L. and Mike Childers of Marion, IL; eight grandchildren, Andrea J. Turner and Angela Baxter of Herrin, IL, Stephen Turner and his wife, Elizabeth of Louisville, KY, Nanci A. Berger and her husband Denny “Buddy”, of Golconda, IL, Christian D. Turner of Marion, IL, Erica R. Hess and husband, Keenan of Herrin, IL, Sydney R. Thomas and Brock Dooley of Dykersburg, IL, Jeffrey Childers of Herrin, IL and Kaleb Childers and wife, Allison of Carmi, IL, five great grandchildren, Cole Hess, Layton Thomas, Turner Berger, Korbyn Hess and Emery E. Turner; sister, Mavis Brandner of Marion, IL; sister-in-law, Rosalie Will of Marion, IL; brother-in-law, Raymond “Sonny” Waldren and wife, Lynda of Marion, IL, other extended family and many friends. He was preceded in death by his parents; and brother, Vilas E. Turner, Jr. Arrangements for Jerry D. Turner were entrusted to the Wilson-McReynolds Funeral Home, 900 N. Court Street, of Marion, IL. The time of visitation was from 5:00 p.m. until 8:00 p.m. on Monday, November 24th at Wilson-McReynolds Funeral Home. During the time of visitation a “Reflection of Life” DVD Memorial Tribute featuring special people, places and events of Jerry’s life was presented to the family and friends. Visitation resumed from 10:00 a.m. until 11:00 a.m. on Tuesday, November 25, 2014, at Community of Faith Church, located at 5280 Meadowland Parkway, west of Marion, IL. Following the time of visitation the funeral service was at 11:00 a.m. with Rev. Todd Greiner and Rev. Dr. Troy Benitone presiding. Comments of memory were presented by Jerry’s daughter, Cheri Childers and granddaughter, Erica Hess. The prelude and postlude musical selections were presented by guitarist, Kevin Fleming, Special vocal musical selections presented during the service were “Shall We Gather at the River”, “How Great Thou Art” and “Amazing Grace” all by Kevin Fleming who accompanied himself on the guitar. Interment followed in Rose Hill Cemetery of Marion, IL. Pallbearers were Jeffrey S. Turner, Gregory D. Turner, James L. Turner, Michael Childers, Stephen Turner and Keenan Hess. Following the committal service at the cemetery the family and friends gathered back at Community of Faith Church for a meal and continued time of fellowship and support. For those who preferred, memorial contributions were made to “Hands of Hope Foundation”. Memorial contribution envelopes were available at the funeral home and the church or were mailed in care of Wilson-McReynolds Funeral Home, P.O. Box 370, Marion, IL, 62959. For additional information please contact the funeral home by calling 618-993-2131.

The family of Jerry Dean Turner created this Life Tributes page to make it easy to share your memories.

Send flowers to the Turner family.