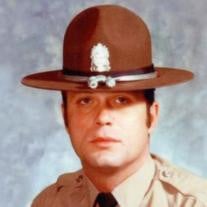 J. Greg Geittmann, age 60, of Marion, IL passed away at 9:05 p.m., on Friday January 27, 2012, in Saint Francis Medical Center in Cape Girardeau, MO. He was born in Carbondale, IL on Tuesday, October 9, 1951, the son of John William and Myrna G. (Cooper) Geittmann. Greg attended school in Marion and was a graduate of Marion High School in 1969. He attended SIU-C and studied drafting. He worked for CIPS as a draftsman for several years. Greg was always interested in law enforcement. He graduated from the Illinois State Police Academy in Springfield in 1974. His first assignment was in Cook County for which he served for 2 years. Desiring to move closer to home, he transferred to Pesotum, IL in 1976. He served the Illinois State Police for 3 years at this location. He moved home to Southern Illinois in 1979, where he worked in District 13 until 1995. Greg found his niche in Illinois State Police at home. He worked in the drug task force, investigations, and patrol. He was a charter member of District 13 drug interdiction program, for which he received numerous awards. He was most proud of the “Director’s Award for Merit” for his drug interdiction abilities. In 1987 the team confiscated over $1M in drugs and money. Greg was of the Protestant faith. In his spare time he enjoyed woodworking and boating. He is survived by his mother, Myrna G. Geittmann of Marion, IL; two sons, Geoff W. Geittmann and Kyle (Geittmann) Howerton both of Marion, IL; sister, Suzanne Lowery of Marion, IL; brother, Bill Geittmann of Marion, IL; two nephews, Shawn Norman of Marion, IL and Will Geittmann of Winchester, KY; two nieces, Heather Geittmann of Brecksville, OH and Heidi Geittmann of Winchester, KY; great niece, Autumn Norman of Marion, IL; aunt, Lorraine Geittmann of Redondo Beach, CA, other extended family and many friends. He was preceded in death by his father. Arrangements for J. Greg Geittmann were entrusted to Wilson-McReynolds Funeral Home, 900 N. Court Street, of Marion, IL. The time of visitation was on Friday, February 3, 2012, between the hours of 1:00 p.m. and 2:00 p.m. at the funeral home. During the time of visitation a “Reflection of Life” DVD Memorial Tribute featuring special people, places and events of Greg’s life was presented to the family and friends. Following the time of visitation the memorial service was at 2:00 p.m. with Rev. John Holst presiding. The prelude and postlude musical selections were recorded piano selections. Special recorded vocal musical selections presented were “His Eye Is on the Sparrow” by B.J. Thomas and “Solitary Man” by Johnny Cash. The service concluded with the recorded instrumental piano musical selection “Amazing Grace”. Following the service the family and friends gathered at Zion United Church of Christ for a meal and continued time of fellowship and support. Interment was in Maplewood Cemetery of Marion, IL. For those who preferred, memorial contributions were made to “Lighthouse Shelter” of Marion, IL. Memorial contribution envelopes were available at the funeral home or were mailed in care of Wilson-McReynolds Funeral Home, P.O. Box 370, Marion, IL 62959 For additional information please call the funeral home at 618-993-2131.

The family of J. Greg Geittmann created this Life Tributes page to make it easy to share your memories.

Send flowers to the Geittmann family.