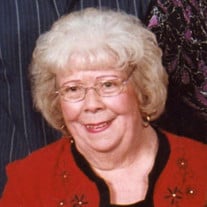 Jo Barger, age 81, of Crab Orchard, IL, passed away peacefully with her family near, at 8:57 p.m. on Tuesday, April 2, 2019, at her home. She was born on Friday, December 17, 1937, at home in Crab Orchard the daughter of Milo P. and Fannie Faith (Turner) Richey. Jo attended school in Crab Orchard and was a graduate of Crab Orchard High School Class of 1955. She was united in marriage to John William Barger on Tuesday, October 4, 1963, in Carmi, IL and together they shared nearly 41 years of marriage until his death on Saturday, May 15, 2004. Jo’s working career was with her husband as a Bookkeeper, owning and operating Barger Bookkeeping and Tax Service from the mid 1960’s to about 2000 until their retirement. She was a former member for many years of Center Baptist Church of Crab Orchard where she served as treasurer and church hostess. Currently she was a member of Second Baptist Church of Marion and member of the Adult II Sunday School Class. She also was a member for many years of the Order of the Eastern Star LeRoy A. Chapter No. 350 of Marion and Williamson County HCE where she served as treasurer for 17 years, just giving up that position recently. In her spare time she enjoyed entertaining, cooking and having parties at her home. Jo loved for the entire family to gather at her home for family dinners. She was very proud of a cook book she had published called “Richey Recipes”. Jo was very creative and enjoyed doing crafts. She loved to sing and was a part of the choir at Center Baptist Church for many years. She was always interested in all the activities of her family. The many memories that have been created will now be cherished by those she leaves behind. She is survived by two sons and daughters-in-law, Scott and Kimberly Barger and Patrick and Tina Barger all of Crab Orchard; granddaughter, Bethany Barger of Crab Orchard; three grandsons, Cody Barger, Jared Barger and his wife Katie and Donovan Barger all of Crab Orchard; three sisters-in-law, Patricia Wiemken and husband Mike and Ursula Richey all of Marion and Barbara Richey of Michigan, other extended family and many friends. She was preceded in death by her parents, husband; two sisters, Margie Miller and Nell Hohlt and four brothers, Warren, Wallace, Julian and Don Richey. Arrangements were entrusted to Wilson-McReynolds Funeral Home, 900 N. Court St., Marion. The visitation was from 5:00 p.m. until 8:00 p.m. on Friday, April 5th at the funeral home. During the time of visitation a “Reflection of Life” DVD Memorial Tribute featuring special people, places and events in Jo’s life was presented to the family and friends. The funeral service was at 11:00 a.m. on Saturday, April 6, 2019, at Wilson-McReynolds Funeral Home with Rev. Ivan Ryan and Rev. Ashby Tillery presiding. The prelude and postlude musical selections were presented by pianist, Rose Fields. Special vocal musical selections presented during the service were “In the Garden” by Katie and Alan Ozment, “Because He Lives” and “Victory In Jesus” as congregational hymns both led by Danny Ward and “It Is Well With My Soul” by Alaura Barras and Danny Ward. All the selections were accompanied by pianist, Rose Fields. Interment followed next to her husband in Coal Bank Springs Cemetery, located southeast of Marion near Dykersburg. Pallbearers were Jim Wiemken, George Barker, Ron Troxel, Denny Belt, Russ Stoup, John Otey and Butch Butler. Following the committal service at the cemetery the family and friends gathered at Second Baptist Church in Marion, for a meal and continued time of fellowship and support. For those who preferred, memorial contributions were made to “Second Baptist Church Building Fund” and mailed in care of Wilson-McReynolds Funeral Home, 900 N. Court Street, Marion, IL 62959. Memorial envelopes were available at the funeral home. For more information call the funeral home at 618-993-2131.

The family of Jo Barger created this Life Tributes page to make it easy to share your memories.

Send flowers to the Barger family.