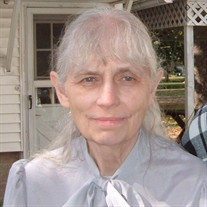 Joan P. Burnett, age 79, of Marion, IL, passed away peacefully at 10:45 a.m. on Friday, February 14, 2020, in Evelyn’s House of Creve Coeur, MO. She was born on Sunday, June 23, 1940, in Chicago, IL, the daughter of Frank and Mary (Rogowski) Topor. She attended elementary school in the Chicago area. She attended high school at Morton High School in Cicero and was a graduate of Proviso East High School of Maywood, IL. She continued on with her education by attending at the University of Illinois in Champaign, IL for 1 year. Joan was united in marriage to Paul Donald Burnett on Saturday, November 8, 1958, in Saint Domitilla Catholic Church of Hillside, IL and together they have shared nearly 62 years of marriage. Early in her working career she worked as a book-keeper for several banks of the Chicago, Villa Park, La Grange and Maywood, IL area. Later she worked for Patent Scaffolding of Chicago renting scaffolding to contractors in their billing and book-keeping department for about 15 years until her retirement. Joan was a member of St. Joseph Catholic Church of Marion and the Ladies Club of the church and enjoyed being a member of the church choir. She also volunteered at the Marion and Herrin Senior Citizens Centers assisting with income tax preparation for many years. In her spare time she enjoyed being outside working in her gardens growing vegetables and tending to her flowers. She also enjoyed traveling, knitting and crocheting and had made many Afghans that she gave as gifts to her grandchildren and others. She enjoyed her family and was always interested in their many activities. The many memories that were created will now be cherished by those she leaves behind. She is survived by her husband, Paul D. Burnett of Marion; five children, Carl A. Burnett and his wife Marilyn of Hickory, NC, Adam D. Burnett and wife Elizabeth “Betsy” of Lisbon, IL, Nicholas D. Burnett and wife Sandi of Marion, Rebecca M. Burnett of Rantoul, IL and Victoria M. Shimkus of Mahomet, IL, 12 grandchildren; brother and sister-in-law, Michael and Linda Topor of Texas, other extended family and many friends. She was preceded in death by her parents. Arrangements have been entrusted to Wilson-McReynolds Funeral Home, 900 N. Court St., Marion. The time of visitation will be on Monday, February 17, 2020, from 4:00 p.m., to 6:00 p.m. at the funeral home. Following the time of visitation the funeral service will be at 6:00 p.m. with Father Brian Barker presiding. For those who prefer, memorial contributions may be made to “St. Joseph Catholic Church” and mailed in care of Wilson-McReynolds Funeral Home, 900 N. Court Street, Marion, IL 62959. Memorial envelopes will be available at the funeral home. For additional information call the funeral home at 618-993-2131.

The family of Joan Patricia Burnett created this Life Tributes page to make it easy to share your memories.

Send flowers to the Burnett family.