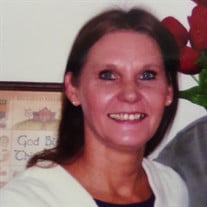 JoAnne Kay Olson, age 57, of Marion, IL, passed away at home surrounded by her family at 12:30 p.m. on Thursday, October 8, 2015. She was born on Monday, November 4, 1957, in Pinckneyville, IL the daughter of William L. and Mary A. (Ceglenske) Seidenstricker. She grew up in Ashley, IL and was a graduate of Nashville High School Class of 1975 and she later received an Associate’s degree from John A. Logan College. She was united in marriage to David Riggle on Saturday, February 27, 2010, in Whiteash, IL and together they shared over five years of marriage. She worked for many years as a coder in the corporate office of Southern Illinois Health Care in Carbondale, IL only leaving for health reasons. JoAnne was a member of New Hope Church of God in Marion. She enjoyed crocheting, spending time with her family, dancing and traveling. She is survived by her husband, David Riggle of Marion, IL; her children Joseph Keller of Lakeland, FL, Jessica Watkins and husband Richard of Pittsburg, IL, Jonathan Hester of Benton, IL, Anna Tindall and husband Tim and Kimberley Miller and husband Lance all of Marion, IL, Dustin Riggle and wife Krista of Oak Grove, KY and Michael Olson and Amanda Olson both of Centralia, IL; two brothers and sisters-in-law, David Seidenstricker and wife Marilyn and Marion Seidenstricker and wife Susan; two sisters, Janell Stephenson and Lois Jean Stelzriede and husband Claude “Bud” Stelzriede; grandchildren, Tyler, Richard, James, Jacob, Jeffrey, Kylie, Logan, Landon, Liviya, Luke, Braylee, Zaden, Raylynn and Talayah, many nieces, nephews, other extended family members and many friends. She was preceded in death by her parents; son, James Hester; sister, Janet Adams and brother, Paul Seidenstricker. Arrangements for JoAnne Kay Olson were entrusted to Wilson-McReynolds Funeral Home, 900 N. Court St., Marion, IL. The visitation was from 1:00 p.m. to 4:00 p.m. on Saturday, October 17, 2015, at the funeral home. During the time of visitation a “Reflection of Life” DVD Memorial Tribute featuring special people, places and events of JoAnne’s life was presented to the family and friends. Following the time of visitation the funeral service was at 4:00 p.m. with Rev. Bill Phillips presiding. Comments of memory were presented by JoAnne’s niece, Paula Antkowiak. The prelude and postlude musical selections were recorded piano selections. A special musical selection “God Will Make a Way”, that was a favorite of JoAnne, was presented as a congregational hymn during the service. The graveside inurnment service was on Monday, October 19, 2015 at 1:00 p.m. in Rose Hill Cemetery of Marion, IL For those who preferred, memorial contributions were made to “American Cancer Society” and mailed in care of Wilson-McReynolds Funeral Home, P.O. Box 370, Marion, IL 62959. Memorial envelopes were available at the funeral home. For additional information please contact the funeral home by calling 618-993-2131.

The family of JoAnne Kay Olson created this Life Tributes page to make it easy to share your memories.

Send flowers to the Olson family.