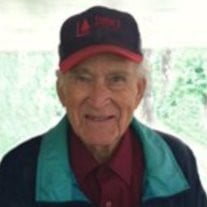 Joe B. Hosmon, age 83, of rural Marion, IL, passed away at 8:20 a.m., on Tuesday, August 27, 2013, in Heartland Regional Medical Center of Marion, IL. He was born near his present home in Williamson County on Monday, September 23, 1929, the son of Joe Henry and Delia Frances (Clines) Hosmon. He attended school at the Western Star Country School located northeast of the Spillertown area. Joe answered the call of this nation by serving in the United States Army during the time of the Korean War. While stationed in Korea and engaged in a fierce battle he was wounded. He traveled for a week with his wound to get to friendly lines and was then flown to a hospital in Japan where he was treated for two months. He was awarded the “Purple Heart” for his wound. After his period of faithful service he was honorably discharged with the rank of Corporal. He was united in marriage to Lydia V. Grimes on Saturday, October 4, 1952, in Piggott, AR and together they have enjoyed nearly sixty-one years of marriage. His working career was as a coal miner. He began working before entering the war at a small hand loading mine in the area. After his return from the service he returned to mining, working at the Carmac Mine near Dykersburg, IL. He later worked at Freeman No. 5 Mine near West Frankfort, IL and ended his career at Old Ben No. 26 Mine located near Sesser, IL. He retired in June of 1992, after 37 years as a miner, all being underground, and was awarded a special award for never having an accident. Joe faithfully attended and supported the Trinity Pentecostal Church of Marion, IL. He also was a proud member of the United Mine Workers of America. In his spare time he enjoyed taking care of his home in the country, mowing the yard, planting flowers and just relaxing sitting on his front porch spending time with his two special Chow dogs, Sambo and Smokey. For over 30 years he has been actively supporting “The Border Mission” located in Hildago, TX on the Mexican border. During his spare time locally he was constantly buying and gathering blankets, shoes and other items for the Mission. Three or four times each year he would travel there driving his truck loaded with items he had collected for the Mission. Earlier in his lifetime he and his wife traveled and served as missionary’s in the interior of Mexico. He especially loved all of his family and always enjoyed the many times they all would gather together. The many memories created will now be cherished by those left behind. He is survived by his wife, Lydia V. Hosmon of Marion, IL; daughter, Shelly Aly of Marion, IL; two sons and one daughter-in-law, Steve and Sandra Hosmon of West Frankfort, IL and Stacy Hosmon of Marion, IL; eleven grandchildren, Heather Willis and her husband, Steve and Haley Woolard and husband, Ben all of West Frankfort, IL, DeAnn Hosmon of Johnston City, IL, Jason Hosmon and wife, Bobbi of Dayton, OH, Sarah Hosmon of Herrin, IL, Amanda Bennett and husband, Shane, Austin Aly and Hannah Aly all of Marion, IL, Priscilla Tucker and husband, Dathan of OK, Jonathan Hosmon and wife, Kristi of KY and Keilah Hosmon of Vienna, IL, fourteen great grandchildren; two sisters and one brother-in-law, Hilda Dunn of Dallas, TX and Faye and Harry Roberts of Los Alamitos, CA; daughter-in-law, Rose Hosmon of Vienna, IL, other extended family and many friends. He was preceded in death by his parents; son, Darren Hosmon who passed away on February 9, 2010; two sisters, Gladys Luskleet and Martha Kelly and three brothers, Harry, Parvin and Finace Hosmon. Arrangements for Joe B. Hosmon were entrusted to Wilson-McReynolds Funeral Home, 900 N. Court St., Marion, IL. The time of visitation for family and friends was on Friday, August 30th, from 5:00 p.m. until 8:00 p.m. at the funeral home. During the time of visitation a “Reflection of Life” DVD Memorial Tribute featuring special people, places and events of Joe’s life was presented to the family and friends. The funeral service was at 11:00 a.m. on Saturday, August 31, 2013, at Wilson-McReynolds Funeral Home with Brother J. R. Woods and Brother Cecil Clendenin presiding. Comments of memory were also presented by Mr. Hosmon’s daughter, Shelly. The prelude and postlude musical selections were presented by Mr. Hosmon’s granddaughter, Priscilla Tucker. Special bluegrass instrumental musical selections presented during the service were “What a Friend We Have in Jesus” and “I’ll Fly Away” both by Austin Aly playing the banjo, Shelly Aly playing the mandolin, Philip Webb playing the base guitar and Aaron Schlag playing the guitar. Other vocal musical selections presented during the service were “When He Reached Down His Hand for Me” was presented by Priscilla Tucker, Keilah Hosmon and Jonathan Hosmon who also accompanied the group on the guitar and “Lord, I’ve Never Been This Homesick Before” presented by Philip and Janel Webb with pianist, Gale Webb accompanying. Entombment followed in Rose Hill Cemetery of Marion, IL. Pallbearers were Harold Hosmon, Roy Hosmon, Casey Hosmon, Jason Hosmon, Jonathan Hosmon and Austin Aly. The committal service at the cemetery was presented by Brother Doug Webb. A special vocal musical selection was also presented at the cemetery was “Ain’t No Grave Going to Hold My Body Down” by Philip Webb, Gail Webb and Brother Doug Webb who also accompanied the group on the guitar. Military honors were accorded at the cemetery with presentation of the flag to Mr. Hosmon’s wife, Lydia. Following the committal service at the cemetery the family and friends gathered at The Abundant Life Assembly Church in Marion, for a meal and continued time of fellowship and support. For those who preferred, memorial contributions were made to the “The Border Mission”. Memorial contribution envelopes were available at the funeral home or were mailed in care of Wilson-McReynolds Funeral Home, P.O. Box 370, Marion, IL, 62959. For additional information please contact the funeral home by calling 618-993-2131.

The family of Joe B. Hosmon created this Life Tributes page to make it easy to share your memories.

Send flowers to the Hosmon family.