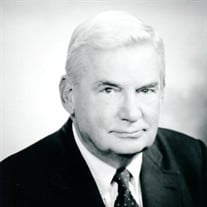 Dr. John B. “J. B.” Heyde, age 90, of York PA and formerly of Marion, IL, passed away peacefully at home with his wife by his side at 7:07 a.m. on Thursday morning, January 26, 2017. He was born on Monday, December 27, 1926, in Marion, IL the son of Theodore Roosevelt “Ted” Heyde and Maurine (Bradley) Heyde. J. B. grew up and attended school in Marion and was a graduate of Marion High School of Class of 1944. He was a member of the First Presbyterian Church of York, PA and a former member of the First United Methodist Church of Marion, IL. He answered the call of this nation on December 26, 1944, by serving in the United States Navy during the World War II and after his period of faithful service was honorably discharged with the rank of Pharmacist’s Mate 3rd Class on August 16, 1946. J. B. was united in marriage to Norma Lee Swinney on Sunday, August 24, 1947, in Marion, IL, and together they shared 49 wonderful years of marriage until her death on Sunday, October 20, 1996. He was later united in marriage to Diane Y. Delozier on Saturday, June 23, 2001, in York, PA and together they have enjoyed over fifteen years of marriage. A native of Marion, IL, Dr. Heyde was a graduate of University of Michigan, earning a Master's Degree in Biochemistry and his Doctor of Dental Surgery Degree in 1957. He began his professional career as a Research Dentist/Scientist in 1957, and retired in 1993 from Dentsply International. He was a member of the York County and American Dental Society and was a Life Member of the Penn State Alumni Association. The memories created during his life will now be cherished by those he leaves behind. He is survived by his wife, Diane Y. Delozier of York, PA, other extended family members, and many friends. He was preceded in death by parents and his first wife Norma Heyde. Arrangements for Dr. John B. “J. B.” Heyde have been entrusted to Wilson-McReynolds Funeral Home, 900 N. Court St., Marion, IL. Graveside service will be in Fountain Cemetery, located south of Marion, at 11:00 a.m. Saturday, February 11, 2017, with Pastor Wade Halva presiding. Those wishing to attend the graveside service should gather at the cemetery prior to 11:00 a.m. Interment will follow on the family lot. Military honors will be accorded at the graveside by members of Heyde-Pillow V.F.W. Post No. 1301 and American Legion Post No. 147 both of Marion and the United States Navy Funeral Honors Burial Detail. For those who prefer, memorial contributions may be made to either or both “First United Methodist Church Choir Fund” or “Fountain Cemetery” and mailed in care of Wilson-McReynolds Funeral Home, 900 N. Court Street, Marion, IL 62959. Memorial envelopes will be available at the cemetery and the funeral home. For additional information please contact the funeral home by calling 618-993-2131.

The family of Dr. John B. "J.B." Heyde created this Life Tributes page to make it easy to share your memories.