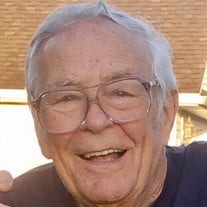 John ‘Jack’ Edward Leaseburg of Charleston, WV, born May 13, 1929 in Clarksburg, WV, passed peacefully on October 9th, 2020, at the home of his daughter, Michelle, surrounded by family and friends. Jack attended Washington Irving High School, Clarksburg, WV. In 1946, he enlisted in the USMC and was stationed in Adak, Alaska. He was honorably discharged in 1948. He enlisted in the USMC Reserves in 1950. Jack saw active duty in Puerto Rico 1950-1951 and was honorably discharged in 1956. Jack’s life work began in 1951 with C&P Telephone Company in Clarksburg, WV. Through his career he held many positions retiring in 1991 from Bell Atlantic as Maintenance Supervisor. During the early years at C&P, he had a blind date with a switchboard operator, Lillian Bowers who would become his wife on Valentine’s Day. Jack was actively involved with the Charleston Civitan Club. Lending his creativity on many Haunted Houses, Pancake Festivals and selling Claxton Fruit Cakes during the holiday season. Jack also served as President of South Hills Pool, Charleston, WV, and family members for over 30 years. Younger years were spent in the hills of WV hunting and fishing. His home was filled with deer and fish trophies along with, stories and memories of friends he made along the way. Jack was a gifted woodworker, crafting many treasures. He looked forward to each spring. A time for new life. He had a love of all plants. Christ in a Manger and dahlia bulbs lovingly dug up in the fall to replant in the spring. The first hummingbirds and bluebirds would arrive knowing they would be fed for the summer. Jack and Lillian spent many hours on the front porch sharing stories with anyone who wanted to sit awhile. Jack loved taking his grandson for walks, talking about nature, playing in the front yard. If the sun was out, so was Jack. He was always ready to lend help, tools or advice. In the fall, Jack loved WVU Mountaineer football and enjoyed analyzing the game with his dear friend, Cheryle Hall. After retirement, Jack, his dog Spot, and his daughter, Tami, frequently explored trails at Kanawha State Forest. Spending hours enjoying a hike or sitting by a stream. He treasured those times most of all. Jacks last years were spent with his daughter, Michelle and her family in Marion, IL. He missed WV but enjoyed the attention. Jack always had a smile, a story, and could have conversations for hours. He was witty, loving, and silly, to the end. He was a most gracious, respectable, and appreciative man. Jack is survived by three daughters and one son-in-law, Kathy Leaseburg of Johnston City, IL, Tamela Leaseburg of Charleston, WV, Michelle (Ed) Queen of Marion, IL and, grandson Ryan Queen of Marion, IL. E Extended family, Cheryle and Marlin Hall of Charleston, WV, and family of Laine (Hall) Gawthrop of Kirkland, WA. Along with many treasured neighbors and friends. He was preceded in death by his wife, Lillian Leaseburg of Charleston, WV; father, John H. Leaseburg; mother, Eva Lee (Cochran) Leaseburg; siblings, Connie Riley of Akron, OH, Lemoyne Wood of Logan, WV and William “Bill” Leaseburg of Clarksburg, WV. Services will be held at a later date. In Dad’s memory, take a walk outside. Remember your time with him. Feed the hummingbirds next spring and watch them as he so loved to do. For additional information please call the funeral home at 618-993-2131.

The family of John "Jack" Edward Leaseburg created this Life Tributes page to make it easy to share your memories.

Send flowers to the Leaseburg family.