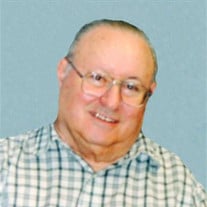 John C. “Johnny” Dingrando, age 87, of Marion, IL, passed away peacefully with his family by his side at 8:04 a.m. on February 17, 2017, at Integrity Health Care Center in Marion. He was born in Marion on September 9, 1929, the son of Leo and Catherine (Duvardo) Dingrando. John was a graduate of Marion High School Class of 1947. His high school buddies used a nickname “Derby”. He then answered the call of the nation by enlisting into the United States Army and after his period of faithful service was honorably discharged. Upon returning to Marion he continued his education by attending Southern Illinois University in Carbondale, IL and received his Bachelor degree in Accounting in 1952. He wore the Saluki colors proudly. John was united in marriage to Ruth Pauline Bostian on December 26, 1953, in Marion and together they have shared over 63 years of marriage. He began his long career with C.I.P.S./Ameren in 1952 as an auditor and accountant until his retirement in 1990. He also had received his Real Estate License in 1985 and worked as an agent for Dave Thompson Realty in Marion for several years. John was a longtime member of St. Joseph Catholic Church in Marion and a charter member of the Marion Knights of Columbus, Council 6210 and the 4th Degree Assembly 2212. He was always interested in being able to serve and help others where needed. He was a very special individual. When he was younger, he worked with the Marion Boys Baseball program, served with the Boy Scouts, served on the Board of Directors of the Egyptian Council of Boy Scouts and was a committee member of Boy Scout Troop 11. After retirement he volunteered for several years at Longfellow grade school with the “Right to Learn” program helping children with reading. He also volunteered with the Marion Soup Kitchen. He loved his family and was always interested in their activities. The many memories that have been created will now be cherished by those he leaves behind. Times at Pleasant Valley Lake Club, family vacations, and Cardinal Baseball games are the source of many fond memories. He is survived by his wife, Ruth Dingrando of Marion; four daughters and their husbands, Linda Vale of St. Louis, MO, Laura and Kenny Pind of Cobden, IL, Mary and Mike Kornblith of St. Charles, IL and Jo Anne Morse of Glen Carbon, IL; two sons, Steve Dingrando of Marion, and David Dingrando of Oak Park, IL; six grandchildren, Brad Pind, Julia Frew, Brandon Morse, Matthew Morse, Nikki Kornblith and Kyle Kornblith; sister-in-law, Sheila Dingrando of Marion; three nephews, Jeff Dingrando, Kris and Jillian Dingrando, and Greg Dingrando. John’s other relatives and many friends will surely miss him dearly. He was preceded in death by his parents; infant granddaughter, Tracy Lynn Pind and three brothers, Joe Dingrando, George Dingrando and Leo Dingrando, Jr. Arrangements for John C. Dingrando were entrusted to Wilson-McReynolds Funeral Home, 900 N. Court St., Marion. The visitation was from 9:00 a.m. until 11:00 a.m. on Monday, February 20, 2017, at the funeral home. Following the time of visitation the funeral service was at 11:00 a.m. at the funeral home with Rev. Monsignor Thomas Flach, V.F. presiding and was assisted by Deacon Ken Hilliard. Comments of memory were presented by sister-in-law Sheila Dingrando and daughter Linda Vale. The Marion Knights of Columbus 4th Degree Assembly 2212 conducted a Farwell Service to begin the funeral service. Participants included Captain of the Color Guard, Richard Heckel; Faithful Navigator, Ray Einig, and Color Guards Dennis Leeke, Thomas Pritchett, and Thom Ivastamin. The prelude and postlude classical musical selections were presented by pianist Lori Creamer. Special vocal musical selections presented during the service were “Amazing Grace”, “Simple Gifts” and “Ave Maria” all by Lori Creamer who accompanied herself on the piano. Interment followed in Rose Hill Cemetery of Marion. Pallbearers were Randy Barton, Kent McCabe, Brandon Morse, Matthew Morse, Brad Pind and Kyle Kornblith. Following the committal service at the cemetery the family and friends gathered at the Family Life Center at St. Joseph Catholic Church for a meal and continued time of fellowship and support. Expressions of sympathy took the form of memorial contributions to “Hospice of Southern Illinois” or a charitable organization of one’s choice. Memorial envelopes were available at the funeral home or were mailed in care of Wilson-McReynolds Funeral Home, 900 N. Court Street, Marion, IL 62959. The family extended heartfelt gratitude to all those who provided care, support, friendship and prayers. For additional information please contact the funeral home by calling 618-993-2131.

The family of John C. "Johnny" Dingrando created this Life Tributes page to make it easy to share your memories.