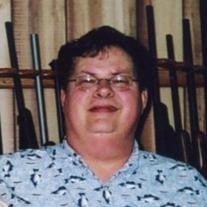 John A. “Johnny” Heyde, age 54, of Marion, IL passed away suddenly at 2:49 p.m., on Saturday, January 5, 2013, in Heartland Regional Medical Center of Marion, IL. He was born on Friday, March 14, 1958, in Marion, IL the son of William Alvis “Al” and Betty Louise (Boyer) Heyde. Johnny attended school in Marion and was a graduate of Marion High School in 1976. He was united in marriage to Regina Kay Baker on Saturday, May 10, 1986, in Marion, IL and together they have shared over twenty-six years of marriage. Johnny’s working career for the last twenty-three years was with Dunn’s Sporting Goods of Marion, IL and currently was managing the gun department of the store. He was known throughout the area for his wealth of knowledge about guns of any kind. He was of the Baptist faith often attending Grange Hall Freewill Baptist Church south of Marion. He was a proud member of the National Rifle Association and the Egyptian Rifle and Pistol Range of Marion, IL. Johnny enjoyed spending time outdoors both hunting and fishing when time permitted. He also enjoyed riding motorcycles, especially Harley Davidson’s, being involved with his son in motocross racing, working on and driving Mustang cars and spending time at the shooting range. He especially loved spending time with his family and his many friends. Those now left behind will cherish the many memories that have been created. He is survived by his wife, Regina K. Heyde of Marion, IL; daughter and son-in-law, Chasity and Scott Rains of Marion, IL; son and daughter-in-law, Jonathan and Megan Heyde of Marion, IL; soon to be born granddaughter, Olivia Heyde; mother, Betty L. Will of Marion, IL; two sisters and brothers-in-law, Dianna and Fred Baker and Liz and Dennis Dunn all of Marion, IL; brother and sister-in-law, Charles and Linda Heyde of Marion, IL; four nieces, Kimberly Schultz and husband, Kent of Vienna, IL, Lisa Johnson and husband Erik of Palm Beach Gardens, FL, Brandi Fox and her husband, Doyle of Marion, IL and Melissa Thompson and her husband, Jessie of Marion, IL; five nephews, Markis Clendenin and his companion, Shirley Kruse of Temple, TX, Billy Heyde and his wife, Cathy of Marion, IL, Brandon Baker of Marion, IL, Derek Baker of Marion, IL and John Baker of Marion, IL; a host of great nieces and great nephews, Ashley Robertson and Whitney Meade and her husband, Doug all of Creal Springs, IL, Wyatt Fox and Walker Fox, Collin Heyde, J. Thompson, Zoey Thompson, Aimee Heyde and Cole Heyde all of Marion, IL, Adeline Clendenin and Dylan Kruse both of Temple, TX and Landon Johnson of Palm Beach Gardens, FL; great-great nephew, Gunner Meade of Creal Springs, IL; father-in-law, Jack Baker of Marion, IL; sister-in-law, Pam Baker of Marion, IL, other extended family and many friends. He was preceded in death by his father, Al Heyde on March 29, 2009. Arrangements for John A. “Johnny” Heyde were entrusted to the Wilson-McReynolds Funeral Home, 900 N. Court Street, of Marion, IL. The time of visitation for family and friends was on Tuesday, January 8th, after 3:00 p.m. at the funeral home. During the time of visitation a “Reflection of Life” DVD Memorial Tribute featuring special people, places and events of Johnny’s life was presented to the family and friends. The funeral service was at 11:00 a.m. on Wednesday, January 9, 2013, at Wilson-McReynolds Funeral Home with Rev. Kevin McNeely presiding. Comments of memory were presented by family member, Doyle “Dugie” Fox. The service began with guitarist, Justin Easton presenting “Simple Man” as an instrumental selection. Other vocal musical selections presented during the service were “Tears In Heaven” and “Time Marches On” both by Justin Easton who accompanied himself on the guitar. The service concluded with the recorded vocal musical selection “Amazing Grace-My Chains are Gone” by Chris Tomlin. Interment followed in Fountain Cemetery located south of Marion, IL. Pallbearers were Doug Meade, Justin Walters, Jessie Thompson, Bart Baldwin, Brandon Baker and Kent Schultz. The committal service concluded at the cemetery with Johnny’s son, Jonathan presenting a rifle salute in his father’s memory. After the committal service at the cemetery the family and friends gathered at Grange Hall Freewill Baptist Church for a meal and continued time of fellowship and support. For those who preferred, memorial contributions were made to either “Fountain Cemetery” or to “Grange Hall Freewill Baptist Church”. Memorial contribution envelopes were available at the funeral home or were mailed in care of Wilson-McReynolds Funeral Home, P.O. Box 370, Marion, IL 62959. For additional please contact the funeral home by calling 618-993-2131.

The family of John A. "Johnny" Heyde created this Life Tributes page to make it easy to share your memories.