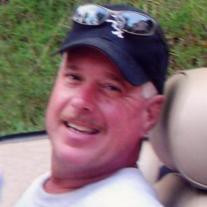 John O. Johnston, age 54, of rural Marion, IL, passed away suddenly at 10:40 a.m., on Friday, April 13, 2012, at his home. He was born in Evergreen Park, IL on Sunday, May 26, 1957, the son of Charles Spencer and Olwen (Williams) Johnston. John attended school in Evergreen Park and was a graduate of Evergreen Park Community High School. He was united in marriage to Julie Ellen Davis on November 21, 1981, in Marion, IL and together they have shared over thirty years of marriage. For many years, John was a truck driver in the City of Chicago until his retirement. His church membership was with Bethlehem Lutheran Church of Chicago, IL and attended First United Methodist Church of Marion, IL. Since the age of 7, John has played the bag pipes and was a piper and member of the Chicago Stock Yard Kilty Band. Some of his other memberships include; American Legion Post No. 147 of Marion, IL; Marion Elks B.P.O.E. # 800 and the National Rifle Association. In his spare time some of his other interests he enjoyed were hunting, especially deer and goose, target shooting on his farm, fishing on Lake Erie, Lake of Egypt and his farm pond, classic cars and drag racing, playing “shoot’em up games” with his great nephew, Ethan, being an avid fan and following Chicago Bears Football and Chicago White Sox Baseball and just relaxing and talking with his friends at the farm. He also was a WW II enthusiast because his parents met during the war. His mother was a gun spotter for the British and his father a U.S. Air Force Fighter Gunner. He is survived by his wife, Julie E. (Davis) Johnston of Marion and Chicago, IL; daughter, Sarah Jane Johnston of Marion and Chicago, IL; sister-in-law, Jane Anne (Davis) Williams of Marion, IL; nieces and nephews, Erin (Davis) Rice and her husband, Sean of Marion, IL, Jeremy Davis of Marion, IL, Joe Williams of Pensacola, FL, Julie Anne (Williams) Lumpkin and her husband, Rick of Spofford, NH and Kaitlin Williams of Marion, IL; great niece and great nephews, Ethan and Shelby Rice both of Marion, IL and Conor and John Lumpkin both of Spofford, NH and many friends. He was preceded in death by his parents, Charles and Olwen Johnston; father-in-law and mother-in-law, Cy and Milanne Davis and two brothers-in-law, Greg Davis and Dr. James R. Williams. Arrangements for John O. Johnston were entrusted to the Wilson-McReynolds Funeral Home, 900 N. Court Street, of Marion, IL. A time of visitation for family and friends was on Monday, April 16th, from 5:00 p.m. until 8:00 p.m. at the funeral home. During the time of visitation a “Reflection of Life” DVD Memorial Tribute featuring special people, places and events of John’s life was presented to the family and friends. The funeral service was at 11:00 a.m. on Tuesday, April 17, 2012, at Wilson-McReynolds Funeral Home with Dr. Bob Dickerson presiding. Comments of memory were presented by John’s daughter, Sarah. The prelude and postlude musical selections were presented by pianist, Armetta Beltz. The service began with the playing of the musical selection “Danny Boy” by bagpiper Paul Thompson. Special musical selections presented during the service were “Here I Am, Lord” as a congregational hymn and “The Lord’s Prayer” by Ashley Beltz both being accompanied by pianist, Armetta Beltz. Interment followed in Rose Hill Cemetery of Marion, IL. At the graveside bagpiper Paul Thompson played the selection “Amazing Grace”. Pallbearers were Frank Storm, Jimmy Storm, Jeremy Davis, Joe Williams, Sean Rice and Christopher Henshaw. Honorary pallbearers were Josh Benson and Noel Rosales. After the committal service at the cemetery the family and friends gathered at John and Julie’s home for a meal and continued time of fellowship and support. For those who preferred, memorial contributions were made to either “The American Heart Association” or “Wounded Warrior Project” an organization to help meet the needs of injured service members returning from war and to provide assistance to their families. Envelopes were available at the funeral home or were mailed in care of the Wilson-McReynolds Funeral Home, P.O. Box 370, Marion, IL 62959. For additional information please call the funeral home at 618-993-2131.

The family of John O. Johnston created this Life Tributes page to make it easy to share your memories.

Send flowers to the Johnston family.