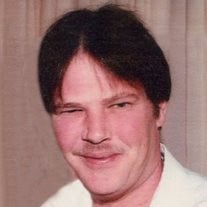 Joseph Jay Lukesh, age 50, of Marion, IL, passed away at 8:24 p.m., on Sunday, April 6, 2014, in Heartland Regional Medical Center of Marion, IL. He was born on Wednesday, March 25, 1964, in Chicago, IL the son Joseph John and Joan Ann (Brock) Lukesh. Joseph grew up and attended school in Chicago, IL and after graduation he worked as a plumber before moving to Marion and working for Baker and Son’s Plumbing in Marion, IL. He was united in marriage to Melody Ann Collins on Thursday, December 23, 1999, in Chicago, IL and together they have shared fourteen years of marriage. He attended St. Joseph Catholic Church in Marion, IL. He is survived by his wife, Melody Ann Lukesh of Marion, IL; daughter Kimberlina D. Lukesh of St. Cloud, FL; two sisters, Catherine M. Lukesh of Oak Lawn, IL and Mickey Sue Olson and husband, David of Ft. White, FL; mother-in-law, Betty Collins of Marion, IL; four sisters-in-law, Linda Medina of Marion, IL Pamela Collins, Mary Mata and Barbara Collins all of Chicago, IL; two brothers-in-law, Michael Collins of Marion, IL and Terrence Collins and wife, Jennifer of Joliet, IL; several nieces and nephews, other extended family and many friends. He was preceded in death by his parents, grandparents and one infant daughter. He loved his family and will be missed by all. Arrangements for Joseph Jay Lukesh were entrusted to Wilson-McReynolds Funeral Home, 900 N. Court St., Marion, IL. The visitation for the family and friends was from 10:00 a.m. until 12:00 noon on Wednesday, April 9, 2014, at the funeral home. Following the time of visitation the funeral service was at 12:00 noon at Wilson-McReynolds Funeral Home, with family members speaking. Those participating were Melody Lukesh, Angelinda Cortes, Tasha Collins and Jimmy Lukesh. The prelude and postlude musical selections were recorded piano selections. Special recorded vocal musical selections presented during the service were “Godzilla” by Blue Oyster Cult, “You Took the Words Right Out of My Mouth” by Meatloaf, “Love Without You” by Darius Rucker, “Believe” by Brooks & Dunn & “In The Arms of An Angel” by Sarah McLachlan. Interment followed in Rose Hill Cemetery of Marion, IL with Rev. Monsignor Thomas Flach presiding. Pallbearers were Jim Blatchford, Tee Collins, David Cortes, Billy Murphy, Timmy Schneider, John Choate and David Massey. Following the service at the cemetery the family and friends gathered at St. Joseph Catholic Church Family Life Center for a meal and continued time of fellowship and support. For those who preferred, memorial contributions were made to “Wilson-McReynolds Funeral Home” to assist the family. Memorial contribution envelopes were available at the funeral home or were mailed in care of Wilson-McReynolds Funeral Home, P.O. Box 370, Marion, IL, 62959. For additional information please call the funeral home at 618-993-2131.

The family of Joseph Jay Lukesh created this Life Tributes page to make it easy to share your memories.

Send flowers to the Lukesh family.