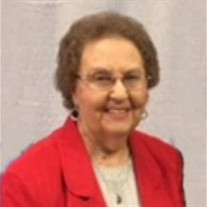 Juanita J. Lindsay, age 83, of rural Marion, IL, passed away peacefully at 5:10 a.m. on Tuesday, November 7, 2017, in Parkway Manor of Marion. She was born on Monday, February 19, 1934, a little northwest of Marion in Williamson County on her grandfather, Otto Jenning’s, farm, the daughter of William Orville and Eunice (Jennings) Batts. Juanita attended the Lamaster School near her home and was a graduate of Marion High School Class of 1952. She was united in marriage to James Louis Lindsay on Saturday, January 10, 1953, in Pocahontas, AR, and together they have shared nearly 65 years of marriage. Juanita never worked outside of the home and found enjoyment in managing the daily activities of her home and seeing to the needs of her family. She has been a longtime member of the Scottsboro Baptist Church and a former member of the Williamson County Home Extension. Juanita was known for her candy making ability, especially during the holidays and presented many candy making demonstrations throughout the area. She also enjoyed listening to Southern Gospel Music, meeting and talking with those who came to buy vegetables at the house, and making Barbie clothes for her granddaughters. She enjoyed spending time with her family, especially her grandchildren. She was always interested in all of their activities and looked forward to the many times they would be together. The many memories that have been created will now be cherished by those she leaves behind. She is survived by her husband; James L. Lindsay of Marion; son and daughter-in-law, Steven and Priscilla Lindsay of Rapid City, SD; mother-in-law, Helen Lindsay Callahan of Marion; daughter-in-law, Robyn L. Lindsay of Creal Springs, IL; seven grandchildren, Rachel DuFault and husband Ben of Amarillo, TX, Naarah Hauenstein and husband Kyle of Mediapolis, IA, Ethan Lindsay and wife Sarah of Mundelein, IL, Colleen Lindsay of Los Angeles, CA, Payton Lindsay and wife Cassie of Tracy, CA, Clark Lindsay, and Hoyt Lindsay both of Creal Springs; five great grandchildren, Caden, Joshua and Elijah Hauenstein and Zipporah DuFault and Asher Lindsay and another great grandson that will be due in January of 2018; brother, Bill Batts of Bethalto, IL; brother-in-law, John Lindsay and his wife Minnie of New Burnside, IL; two sisters-in-law, Cindy Simmons and her husband Steve of Marion and Judy Pfaff and her husband Wendell of Ringold, GA, other extended family, and many friends. She was preceded in death by her parents, stepmother, Esther McCormick Batts, father-in-law, James Wilson Lindsay, and son, Robert “Bob” Lindsay on October 17, 2014. Arrangements for Juanita J. Lindsay were entrusted to Wilson-McReynolds Funeral Home, 900 N. Court St., Marion. The visitation was from 4:00 p.m. until 7:00 p.m. on Friday, November 10th at the funeral home. During the time of visitation a “Reflection of Life” DVD Memorial Tribute featuring special people, places and events of Juanita’s life was presented to the family and friends. The funeral service was at 11:00 a.m. on Saturday, November 11, 2017, at the funeral home with Pastor Mike Hood presiding. Reading of a special letter of memories was by Juanita’s grandson Clark Lindsay. Comments of memory were also presented by Juanita’s grandchildren Ethan Lindsay, Naarah Hauenstein and Rachel DuFault and daughter-in-law Priscilla Lindsay. The prelude and postlude musical selections were presented by pianist Lori Creamer. Special vocal musical selections presented during the service were “I’ll Fly Away”, “How Great Thou Art” and “Mansion Over the Hilltop” all by Lori Creamer who accompanied herself on the piano. Pallbearers at the funeral home on Saturday were Payton Lindsay, Clark Lindsay, Hoyt Lindsay, Ethan Lindsay, Ben DuFault and Kyle Hauenstein. Following the service at the funeral home the family and friends gathered at Scottsboro Baptist Church for a meal and continued time of fellowship and support. Due to the Veteran's Day Holiday, interment followed in Rose Hill Cemetery of Marion at 10:00 a.m. on Monday, November 13, 2017. Those attending the graveside committal service gathered at the cemetery prior to 10:00 a.m. Pallbearers at the cemetery were Gordon Atwood, Steve Simmons, Colleen Lindsay, Hoyt Lindsay, Ethan Lindsay and Steve Lindsay. For those who preferred, memorial contributions were made to, “Scottsboro Baptist Church” and mailed in care of Wilson-McReynolds Funeral Home, 900 N. Court Street, Marion, IL 62959. Memorial envelopes were available at the funeral home. For additional information call the funeral home at 618-993-2131.

Juanita J. Lindsay, age 83, of rural Marion, IL, passed away peacefully at 5:10 a.m. on Tuesday, November 7, 2017, in Parkway Manor of Marion. She was born on Monday, February 19, 1934, a little northwest of Marion in Williamson County on her... View Obituary & Service Information

The family of Juanita Jane Lindsay created this Life Tributes page to make it easy to share your memories.

Send flowers to the Lindsay family.