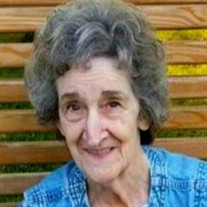 Juanita M. Sprague, age 86, of Marion, IL, passed away peacefully with her family near, at 11:47 a.m. on Friday, January 22, 2021, at her home. She was born on Saturday, April 21, 1934, in Leachville, AR, the daughter of Willie D. and Della Kate (Mitchell) Thweatt. Juanita attended school in Marion and was a graduate of Marion High School Class of 1952. She was united in marriage to Richard Sprague on Friday, November 21, 1952, in Marion, and together they shared over 57 years of marriage until his death on Sunday, January 3, 2010. Juanita was a homemaker and she found enjoyment in managing her home and seeing to the needs of her husband and raising her four children. She was a long time member of the Second Baptist Church of Marion. In her spare time she found enjoyment listing to country and bluegrass music, was an avid reader, was always interested in reading about and visiting Lighthouses and often taking a drive and just sightseeing all over the area. She loved her large family and always looked forward to the many family gatherings. She was always interested in all of their many different activities. The memories that have been created will now be cherished by those she leaves behind. She is survived by her two daughters and sons-in-law, Kathy and Bob James of Lewisburg, TN, and Karen and Jim Whitt of Marion; two sons and daughter-in-law, Richard L. “Rick” Sprague of Marion and Scott and Kara Sprague of Marion; nine grandchildren, Samantha Franks and husband, Gene of Ferguson, MO, Samuel Hogue and wife, Cian of Breese, IL, Jake Whitt and wife, Jennifer of Dykersburg, IL, Josh Whitt and wife, Amy serving in the US Airforce stationed in England, Erick Sprague of Mt. Vernon, IL, Kristie Webb and husband, Jason of Marion, Rob James and wife, Anne of Valmeyer, MO, Melissa Leisse and husband, Mark of St. Louis, MO and Bryan James and wife, Nikki of St. Louis, MO; eighteen great grandchildren, Kaileigh Webb and Hunter Webb both of Marion, Ashley Sprague of Pittsburg, IL, Shadow Lee Sprague of Mt. Vernon, IL, Jared Whitt and Jordan Whitt both of Dykersburg, IL, Jodie Whitt of Bossier City, LA, Jenna Fister of England, Matt Wolf and wife, Kasey of Millstadt, IL, Emily Schley and husband, Jack of Milwaukee, WI, Kaitelynn Rodiguez and husband, Martin of San Angelo, TX, Raven Kuehn and Maxine Kuehn both of Belleville, IL, Abbey Galindo and husband, Eric of Peculiar, MO, Nick Hogue and wife, Alex of Belleville, IL, Allie Hogue of Breese, IL, Savanna Kirk of Murfreesboro, TN and Austin Hallock of Petersburg, IL; five great-great grandchildren, Wyatt Wolf of Millstadt, IL, Thomas J. “T.J.” Schley of Milwaukee, WI, Maxwell Hogue of San Angelo, TX, Jasiah Ridiguez of San Angelo, TX, Oliver Hallock of Petersburg, IL; sister, Clorice Kent of Marion; five sisters-in-law, Carol Sprague of Edmond, OK, Joanne Olsen and husband, Bill of Marion, Jeanetta Sexton and husband, Paul of Baldwin Park, CA, Peggy (Sprague) Robinson and husband, Paul of Marion, and Lucy Sprague of Marion, a large host of extended family and many friends. She was preceded in death by her parents, husband; granddaughter, Ashleigh Sprague and sister, Effie Barwick. Arrangements were entrusted to Wilson-McReynolds Funeral Home, 900 North Court Street, Marion. The visitation was on Tuesday, January 26th, from 5:00 p.m. to 8:00 p.m. at the funeral home. During the time of visitation a “Reflection of Life” DVD Memorial Tribute featuring special people, places and events in Juanita’s life was presented to the family and friends. The funeral service was on Wednesday, January 27, 2021, at 11:00 a.m. at Wilson-McReynolds Funeral Home with Dr. Bob Wagner presiding. The prelude and postlude musical selections were presented by pianist, Terry Ragain. Special recorded vocal musical selections presented during the service were “How Great Thou Art” and “In the Garden” both by Elvis Presley and “Look What I’m Trading for a Mansion” by The Inspirations. Interment followed next to her husband in Rose Hill Cemetery of Marion, IL. Pallbearers were Sam Hogue, Jake Whitt, Jason Webb and James Whitt. Following the committal service at the cemetery the family and friends gathered at Bennie’s Restaurant for a meal and continued time of fellowship and support. For those who preferred, memorial contributions were made to “St. Jude Children’s Research Hospital” or “Shriners Hospitals for Children”. Memorial contributions were mailed in care of Wilson-McReynolds Funeral Home, 900 N. Court Street, Marion, IL 62959. For additional information call the funeral home at 618-993-2131.

The family of Juanita Maxine Sprague created this Life Tributes page to make it easy to share your memories.

Send flowers to the Sprague family.