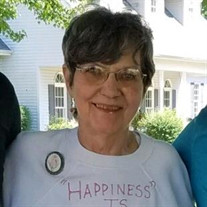 Judith Irene “JP” Wynn, age 71, of Marion, IL and formerly of Herrin, IL, passed away peacefully with her family at her side at 1:21 p.m. on Tuesday, November 28, 2017, in Integrity Health Care of Marion, IL. She was born on Friday, February 15, 1946 in Danville, IL, the daughter of Samuel G. and Dora Maxine (Cunningham) Wynn. Judy grew up and attended school in Danville and was a graduate of Champaign High School Class of 1964. She was a member of the First Presbyterian Church in Herrin where she attended for many years. In her spare time she enjoyed reading and writing, and volunteering at the Light House Shelter in Marion. She loved visiting with her family and friends and especially her grandchildren and enjoyed a special bond with her grandson, Kyle. She was blessed to work in different clerical positions and then for about fifteen years until her retirement in 2005 she was employed with Franklin-Williamson Human Services in a social services child welfare position where her true passion was to be a help to others. She is survived by her two daughters and sons-in-law, Anne and Travis Emery of Marion, IL and Brenda and Scott Bradford of Goreville, IL; grandchildren, Ben & Marissa Emery, Kyle Emery, Austin Patterson, Makane Patterson and Izabella Bradford; brother-in-law, Bill Wright; nieces and nephews, Chris & Klaudia Martin, Gayle Martin and Ryan Martin; Great nieces, Paige Milton and Katy Martin; Great nephews, Alec Martin and Bailey Martin; father of her daughters, Gilbert Pottorff and wife, Gayla, of Cambria, IL; special friends, Linda and Tom Shipley of Tolono, IL, Hugh Muldoon and Judy Ashby all of Carbondale, IL, Mary Kay Bachman and Steve Banker of Marion, other extended family, and many friends. She was preceded in death by her parents and sister, Debbie Martin-Wright. Arrangements for Judith Irene “JP” Wynn have been entrusted to Wilson-McReynolds Funeral Home, 900 N. Court St., Marion. The visitation will be from 1:00 p.m. until 2:00 p.m. on Saturday, December 2nd at the funeral home. The memorial service will be at 2:00 p.m. on Saturday, December 2nd, 2017, at the funeral home with Rev. Michael Neubert presiding. Interment will follow at a later date in Roselawn and Mound Cemetery of Charleston, IL. For those who prefer, memorial contributions may be made to “Hospice of Southern Illinois” and mailed in care of Wilson-McReynolds Funeral Home, 900 N. Court Street, Marion, IL 62959. Memorial envelopes will be available at the funeral home. For additional information call the funeral home at 618-993-2131.

The family of Judith Irene "JP" Wynn created this Life Tributes page to make it easy to share your memories.

Send flowers to the Wynn family.