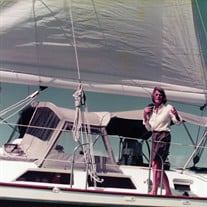 Julia C. Throgmorton, age 93, of rural of Carbondale, IL passed away peacefully at 7:18 p.m. on Monday, September 5, 2016, in the Ray and Kay Eckstein Hospice Care Center of Lourdes Hospital in Paducah, KY. She was born on Sunday, April 15,... View Obituary & Service Information

The family of Julia Catherine Throgmorton created this Life Tributes page to make it easy to share your memories.

Send flowers to the Throgmorton family.