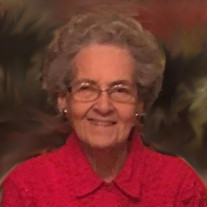 June Smith Minton, age 90, of Marion, IL, passed away at 10:21 pm on Wednesday, June 19, 2019, in Memorial Hospital of Carbondale, IL. June was born Sunday, September 30, 1928, in Cairo, IL the daughter of Floyd James and Ruby Ellen (Wilson) Smith, Sr. She was united in marriage to Robert J. (Bob) Minton on Saturday, December 2, 1967, in Marion, and together they shared nearly 39 years until his death on Tuesday, April 25, 2006. June joined the First Christian Church in Cairo in 1937. She transferred her membership to the First Christian Church in Marion, in 2007. She was a 1946 graduate of Cairo High School. From 1946 until 1951, she worked as a secretary to the President of Woodward Hardware Company in Cairo. In 1951, she began working for the State of Illinois Department of Veterans Affairs in the Cairo Office. In 1965, she became an Itinerant Secretary, training new employees, filling vacations and illnesses, until 1947, when a position became open in the Marion Office. She worked in the Marion Office from 1974, until her retirement in 1991, for a total of 40 years of service with the State of Illinois. June has been a volunteer at Marion Memorial Hospital and Heartland Regional Medical Center in Marion since May 4, 1994 and at the States Attorney’s Office in the Courthouse in Marion since February, 1998. June started fishing and hunting at an early age with both her father and her mother. She especially enjoyed Goose and Duck Hunting and Deer Hunting. She and her husband, Bob, spent many a day together hunting and fishing. During World War II, she worked for the Thistlewood Dairy in Cairo. The owner was also the owner of the Cairo Airport. She joined the Civil Air Patrol on September 9, 1944. She continued flying when she could and received her Private Pilot’s License in 1951. June was a member of the Elks, the Rebekah Lodge, Order of the Eastern Star, AARP, HRMC Senior Circle, the Senior Club, Illinois Sherriff’s’ Association and State of Illinois Retirees Association. She was a life member of the VFW Auxiliary, National Rifle Association and Heartland Regional Medical Center Auxiliary. June is survived by her nieces, Cynthia (Smith) Piephoff of Ballwin MO, and Christine (Smith) Becker and husband, Doug, of Coppell TX; nephews, F. James Smith, of St. Louis, MO and Thomas R. Smith, and wife, Anne of Columbia, MO; son-in-law, Jim Whitehead, of Jonesboro, IL; grandsons, Brian J. Whitehead, of Jonesboro, IL, and Alan M. Whitehead, of St. Louis, MO; sister-in-law, Frances (Smith) VandeKerk of St. Louis, MO, a host of great and great-great nephews and nieces, cousins; and relatives by her marriage to Bob, all who were very special to her. June was preceded in death by her parents, husband Bob; brother, Floyd J. Smith, Jr.; daughter, Lisa M. Whitehead, several aunts, uncles and cousins. Arrangements have been entrusted to Wilson-McReynolds Funeral Home, 900 N. Court St., Marion. In accordance with her wishes, her body was donated to science. Internment will take place at a later date, next to her husband, Bob, in Alto Pass Cemetery, of Alto Pass Illinois. For those who prefer, memorial contributions may be made to: “PAWS Animal Shelter” or mailed in care of Wilson-McReynolds Funeral Home, 900 N. Court Street, Marion, IL 62959. Memorial envelopes are available at the funeral home. For additional information please call the funeral home at 618-993-2131.

The family of June Smith Minton created this Life Tributes page to make it easy to share your memories.

Send flowers to the Minton family.