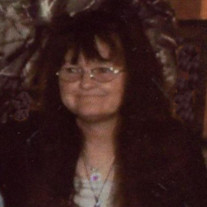 Karen A. “Hillbilly” “Aunt Bo” Smith, age 50, of Vienna, IL passed away peacefully with her family by her side at 2:46 p.m. on Monday, July 4, 2016, at the home of her father and mother, Gordon and Judy Holmes of rural Creal Springs, IL. She was born on Thursday, October 28, 1965, in Marion, IL, the daughter of Gordon and Judy Ann (Edds) Holmes. Karen attended school in Crab Orchard, IL and was a graduate of Crab Orchard High School Class of 1983. She was a homemaker and found enjoyment taking care of her home. Karen was a member of the Church of Christ of Marion. She was an avid Miami Dolphin Football fan and also was a collector of dolphins. She loved her family and enjoyed the many times they all would gather together. The many memories that were created will now be cherished by those she leaves behind. She is survived by her parents, Gordon and Judy Holmes of Creal Springs; brother and sister-in-law, Kevin and Connie Holmes of Creal Springs; two sisters and one brother-in-law, Kelli Holmes of Johnston City, IL and Kila and Randall Little of Creal Springs; four nieces, Kayla Johnson of Harrisburg, IL, Kerrigan Holmes of Energy, IL, Becky Johnson and husband Garrett of Carterville, IL and Hadley Holmes of Creal Springs; nephew, Zachary Johnson of Dykersburg, IL; great nephew, Mason Henry of Dykersburg, other extended family and many friends. Arrangements for Karen A. “Hillbilly” “Aunt Bo” Smith were entrusted to Wilson-McReynolds Funeral Home, 900 N. Court St., Marion, IL. The visitation was from 11:00 a.m. until 1:00 p.m. on Thursday, July 7, 2016, at the funeral home. Following the time of visitation the funeral service was at 1:00 p.m. with Pastor Bill Brandstatter presiding. The prelude and postlude musical selections were recorded acapella musical selections presented by The Harding University Choir. Special acapella musical selections presented during the service were “One Day at a Time”, “Precious Memories” and “Wind Beneath My Wings” all by Lori Creamer. The service concluded with the recorded musical selection “Can I Pray For You” by Mark Bishop. Interment followed near her grandparents in Wise-Robinson Cemetery of Ozark, IL. Pallbearers were Zachary Johnson, Tim Morris, Anthony Holmes, Trent Rich, Don Richey and Todd Holmes. Following the committal service at the cemetery the family and friends gathered at the Church of Christ in Marion, for a meal and continued time of fellowship and support. For those who preferred, memorial contributions were made to Karen’s parents “Gordon & Judy Holmes" to help with final expenses, and mailed in care of Wilson-McReynolds Funeral Home, P.O. Box 370, Marion, IL 62959. Memorial envelopes were available at the funeral home. For additional information please contact the funeral home by calling 618-993-2131.

The family of Karen Ann "Hillbilly" "Aunt Bo" Smith created this Life Tributes page to make it easy to share your memories.