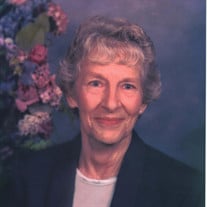 Katherine Virginia Borum, age 85, of Harrisburg, IL was born November 16, 1930 in Elkville, IL and passed away peacefully at 6:10 a.m. on Monday, October 17, 2016, in Memorial Hospital in Belleville, IL. Katherine grew up and attended School in the Creal Springs and Marion, IL area. She was a longtime resident of Harrisburg and was a member of the North America Baptist Church of Harrisburg. Katherine was united in Marriage to Harold L. Borum, on Sunday, February 6, 1949 and together they shared over nineteen years of marriage. Harold passed away on Tuesday, October 8, 1968 as the result of a mine accident. She was employed for twenty years by the Shawnee Rose Care Center in Harrisburg where she worked in housekeeping and laundry service. She is survived her daughter, Marilyn Sullivan and husband, Charles of Waterloo, IL; son Vernon Borum and wife, Swanporn of Panama City, FL; a grandson, Tony Darnell of Marissa, IL; three great grandchildren, Skyler, Bentley and Brandon; several nieces, nephews, other extended family and many friends. She was preceded in death by her parents; husband, Harold; brother, Joe Boner and two grandchildren, Bobby Borum and Terry Darnell. Arrangements for Katherine V. Borum have been entrusted to Wilson-McReynolds Funeral Home, 900 N. Court St., Marion, IL. Private graveside committal service will be in Shiloh Cemetery south of Marion, IL. Interment will be next to her husband, Harold. There will be no public visitation or service. The family would like to thank the Harrisburg Meals on Wheels and Heartland Hospice of Illinois for their helpful support and kindness. For additional information please visit our website at www.wilsonmcreynolds.com or call the funeral home at 618-993-2131.

The family of Katherine Virginia Borum created this Life Tributes page to make it easy to share your memories.

Send flowers to the Borum family.