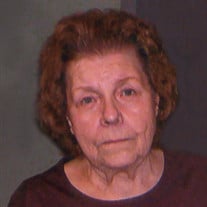 Kathryn J. Wall, age 87, of Marion, IL passed away at 4:38 p.m. on Saturday, March 7, 2015, in Heartland Regional Medical Center of Marion, IL. She was born on Sunday, October 23, 1927, in Creal Springs, IL the daughter of Odell and Ruby Faye (Thetford) Rainbolt. Kathryn was united in marriage to Kenneth B. Wall on Thursday, October 28, 1943, in Charleston, MO and together they shared nearly fifty-five years of marriage until his death, on Friday, March 27, 1998. Her working career was in various positions with county and state government during her lifetime. Her last position of employment was with the State of Illinois Central Management Services as a switchboard operator at the State Office Building in Marion for many years until her retirement. Kathryn was of the Baptist faith. In the past years she was actively involved and served as past president of the Williamson County Republican Women’s Club. She was known as a “people person” and enjoyed visiting and talking with just about anyone who she met. Her family was a very important part of her life and she was always interested in all of their activities. She enjoyed all the times they gathered together and cherished the many memories that were created. She is survived by two daughters and son-in-law, Brenda and Ronnie Sauer of Henderson, KY and Dianne Wall of Marion, IL; two sons and daughters-in-law, Wade and Marti Wall of Panama City Beach, FL and Keith and Debby Wall of Marion, IL; nine grandchildren, Donnie Sauer and wife, Stacy, Darrin Gravatt, Mike Gravatt, Chad Gravatt, Kyle Wall and wife, Stacy, Derek Wall and wife, Crystal, Haley Perzee and husband, Lyndon, Nathan Wall and Ethan Wall; ten great grandchildren, Morgan Nicole Gravatt, Kaleigh Gravatt, Drake Gravatt, Koby Wall, Kade Wall, Peyton Wall, Kendall Wall, Avery Sauer, Luke Sauer and August Mitchell Perzee; great-great grandson, Xander Fuqua; four sisters, Rosalyn “Rosie” Maragni of West Frankfort, IL, Jeannie Rainbolt of West Frankfort, IL, Judith Lee “Judy” Richerson of Mount Vernon, IL and Mary Lou Pasko of Niles, IL; sister-in-law, Ardell Wall of Creal Springs, IL; brother-in-law, Don Wall of Creal Springs, IL; son-in-law, Ken Gravatt of Marion, IL, other extended family and many friends. She was preceded in death by her parents, husband; three sisters, Betty Faye Mayer, Dottie Jo Bratten and Franny Rainbolt who passed away as an infant; two brothers, James David and Jack Rainbolt and grandson, Tyler Keith Wall. Arrangements for Kathryn Jane Wall were entrusted to Wilson-McReynolds Funeral Home, 900 N. Court St., Marion, IL. The time of the visitation was from 11:00 a.m. to 1:00 p.m. on Thursday, March 12, 2015, at the funeral home. Following the time of visitation the funeral service was at 1:00 p.m. with Kathryn’s son, Keith Wall presiding. The service began with two instrumental musical selections “The Glade” and “Top of the World” by The Royal Scottish National Orchestra. Also presented during the service were two vocal musical selections “Learning to Lean on Jesus” and “It Is Well with My Soul” by vocalist, Joe Stricklin with guitarist, Jeff Hill accompanying. The service concluded with the instrumental musical selection “I Won’t Have to Cross Jordan Alone” by The Nashville Fiddles. Interment followed next to her husband in Rose Hill Cemetery of Marion, IL. Pallbearers were Donnie Sauer, Mike Gravatt, Chad Gravatt, Kyle Wall, Derek Wall and Ethan Wall. For those who preferred, memorial contributions can be made to the “National Multiple Sclerosis Society” and mailed in care of Wilson-McReynolds Funeral Home, P.O. Box 370, Marion, IL 62959. Memorial envelopes were available at the funeral home. For more information please call 618-993-2131.

The family of Kathryn Jane Wall created this Life Tributes page to make it easy to share your memories.

Send flowers to the Wall family.