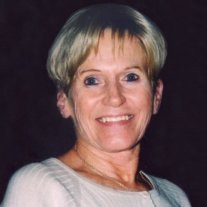 Kay Ann Meredith, age 78, of the Lake of Egypt, IL, formerly of Cedar Lake, IN, passed away peacefully with her husband Dale, by her side at 3:17 p.m. on Saturday, March 2, 2013, in Landmark Hospital of Cape Girardeau, MO. She was born on Monday, February 25, 1935, in Chicago, IL the daughter of Elmer and Elizabeth (Colp) Bradford. Kay attended school in Chicago and was a graduate of Finger High School and continued on with her college education. She was united in marriage to Delmer “Dale” Meredith on Friday, February 15, 1974, in Cedar Lake, IN and together they have shared over thirty-nine years of marriage. After moving down to the Lake of Egypt area, about 8 years ago, she joined and became a member of Lake of Egypt Christian Church. She also was a member of the “Red Hat Society” of this area, always looking forward to and enjoying the times all the ladies would gather together. Early in Kay’s working career she was with the University of Chicago and later with Sherwin-Williams Paints also of Chicago. Her last employment for fifteen years was with Blue Cross-Blue Shield Insurance Company as a customer representative until her retirement in 2002. In her spare time she and her husband Dale, bred, raised and trained Arabian Horses. They have showed and sold Arabian’s all over the country and also would travel to many sales looking for that special horse to purchase. She and Dale created many memories together that will now be cherished. She is survived by her husband, Delmer “Dale” Meredith of the Lake of Egypt, IL; two sons and one daughter-in-law, Alan and Marilyn Clark of Atlanta, GA and Brad Meredith of St. Louis, MO; granddaughter, Kelly Meredith of Oak Forest, IL; three grandsons, Steven Meredith and Shane Meredith both of Atlanta, GA and Kevin Meredith of Oak Forest, IL; sister and brother-in-law, Joy and Richard Zimmerman of Elmhurst, IL, other extended family and many friends. She was preceded in death by her parents and her daughter, Brenda Panico who passed away at the age of 12 from the results of an automobile accident. Arrangements for Kay Ann Meredith were entrusted to the Wilson-McReynolds Funeral Home, 900 N. Court Street, of Marion, IL. The time of visitation for family and friends was on Tuesday, March 5, 2013, from 2:00 p.m. until 6:00 p.m. at the funeral home. Following the time of visitation the funeral service was at 6:00 p.m. with Rev. Leroy Waggoner presiding. Comments of memory were presented by Kay’s grandson, Kevin Meredith. The prelude and postlude classical instrumental musical selections were presented by pianist, Lori Creamer. Special recorded vocal musical selection presented during the service was “Tears in Heaven” by Eric Clapton. For those who preferred, memorial contributions were made to “Lake of Egypt Christian Church”. Memorial contribution envelopes were available at the funeral home or were mailed in care of Wilson-McReynolds Funeral Home, P.O. Box 370, Marion, IL 62959. For additional information please call the funeral home at 618-993-2131.

Kay Ann Meredith, age 78, of the Lake of Egypt, IL, formerly of Cedar Lake, IN, passed away peacefully with her husband Dale, by her side at 3:17 p.m. on Saturday, March 2, 2013, in Landmark Hospital of Cape Girardeau, MO. She was born on... View Obituary & Service Information

The family of Kay Ann Meredith created this Life Tributes page to make it easy to share your memories.

Send flowers to the Meredith family.