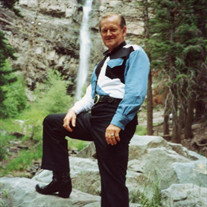 Kenneth A. Gant, 77, of Lake of Egypt, passed away on Thanksgiving Day, November 26, 2020, with his loving wife by his side, at Herrin Hospital in Herrin, IL. Kenny was born on Friday, July 16, 1943, in West Frankfort, IL, in the front bedroom of his parents’ home, the son of Henry and Sarah Gant. He was united in marriage with Janney Thompson on July 1, 2001 standing in front of Cascade Waterfalls in the town of Ouray, CO where it is legal to marry yourself but Kenny wanted to marry Janney, not himself, a joke his wife still cherishes to this day. Together they have shared over 19 indescribable years of marriage. Kenny was a coal miner for 34 years at Old Ben, Ziegler 11 and retired in 2002. During a mine shut down he drove for STAR until he was able to return to the mines. Kenny attended Lake of Egypt Christian Church for 19 years and had the most beautiful singing voice, he even sang at his home church, Bethel Church in Benton, IL, and sang in Specials at both churches. In his spare time, Kenny enjoyed traveling on his motorcycle with his wife behind him to the beaches and the mountains and everywhere in-between. His wife would tease him about his bike being first, his truck the second and she was the third, which he would never admit. He and his wife were proud members of the Christian Motorcycle Association, chapter: The Lords Paheece for many years. He was an avid knife, gun and pistol maker, wood worker and enjoyed his time in the outdoors hunting and fishing. His hobbies were endless and there are too many to fathom. He had the quickest sense of humor of anyone his family ever knew and could make anyone laugh and brighten their day. Kenny served the Lord, he lived by the saying, “As for me and my house, we will serve the Lord” and he did just that. He is survived by his wife of 19 years, Janney Gant of Lake of Egypt, IL; his sister Sue Newman of West Frankfort, IL; brother, Rodger and his wife Peggy Gant of Spicer, MN; his son, Brian and his wife Mandy Gant of Christopher, IL; daughter, Kendra and her husband Carson Sullivan of Omaha, NE; daughter Laura and her husband Terry Walters of West Frankfort, IL; seven grandchildren, Harley, Brittni, Makala, Nathan, Kristyn, Makenzie and Jasmine; three great grandchildren, Makina, Paxton and Caralynn; niece, Amy and Ray Grove; nephew Brad and his wife Carey Newman; great nephews, Brandon Grove and Jonny Newman; other extended family and countless friends. “Until we ride again, you’re forever in my heart, I love you endlessly”- Janney Arrangements were entrusted to Wilson-McReynolds Funeral Home, 900 N. Court Street, Marion, IL. The memorial service will be at 11:00 a.m. on Friday, July 16, 2021, at Wilson-McReynolds Funeral Home, 900 North Court Street, Marion, IL, with Pastor Leroy Waggoner presiding. The family requests for those who prefer, memorial contributions be given to “American Diabetes Association” and/or “Lake of Egypt Christian Church” to be used for new sound system. Memorial contributions may be mailed in care of Wilson-McReynolds Funeral Home, 900 N. Court Street, Marion, IL, 62959. Memorial envelopes will be available at the funeral home. For additional information call the funeral home at 618-993-2131.

Kenneth A. Gant, 77, of Lake of Egypt, passed away on Thanksgiving Day, November 26, 2020, with his loving wife by his side, at Herrin Hospital in Herrin, IL. Kenny was born on Friday, July 16, 1943, in West Frankfort, IL, in the front bedroom... View Obituary & Service Information

The family of Kenneth Amel Gant created this Life Tributes page to make it easy to share your memories.

Kenneth A. Gant, 77, of Lake of Egypt, passed away on Thanksgiving...

Send flowers to the Gant family.