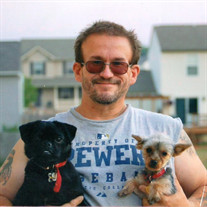 Kenneth Richard Skora, age 50, of Appleton, WI, passed away peacefully while sleeping in his truck at a truck service plaza on the Ohio Turnpike near Woodville, OH. He was found by authorities at 2:12 p.m. on Friday, April 8, 2016, in the sleeper of his truck. He was born Wednesday, July 1, 1965, in Franklin, IN, the son of Robert Francis and Sandra (Ullom) Skora. Kenneth was a graduate of the Fox Valley Lutheran High School of Appleton, WI. He answered the call of the nation by serving in the United States Navy from 1984 until 1990, serving aboard the USS Kennedy and the USS Virginia. After his period of faithful service he was honorably discharged with the rank of Signalman Second Class. His working career was with Ecklund Logistics in Wisconsin as an over the road truck driver and was currently driving for them at the time of his death. He is survived by his parents Robert and Sandra Skora of Marion, IL; brother and sister-in-law, Bill and Cindy Skora of Courtland, VA; niece, Melissa Francis of Norfolk, VA; two special companion dogs that were always with him, Charlotte and Ruby, other extended family and many friends. Arrangements for Kenneth Richard Skora have been entrusted to Wilson-McReynolds Funeral Home, 900 N. Court St., Marion, IL. The graveside committal service will be on Monday, April 18, 2016, at 1:00 p.m. in the Clay City Cemetery of Clay City, IL with Rabbi Moshe Laurie presiding. Military honors will be accorded at the graveside by members of the Flora, IL VFW Post No. 3999 and members of the United States Navy Funeral Honors Detail. Interment will follow the service next to his grandparents, Robert and Lois Ullom in the Clay City Cemetery. Those wishing to attend the graveside service should gather at the cemetery prior to 1:00 p.m. For additional information please contact the funeral home by calling 618-993-2131.

Kenneth Richard Skora, age 50, of Appleton, WI, passed away peacefully while sleeping in his truck at a truck service plaza on the Ohio Turnpike near Woodville, OH. He was found by authorities at 2:12 p.m. on Friday, April 8, 2016, in the sleeper... View Obituary & Service Information

The family of Kenneth Richard Skora created this Life Tributes page to make it easy to share your memories.

Send flowers to the Skora family.