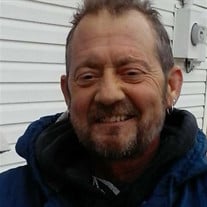 Kevin Ray Jeralds, age 51, of Marion, IL passed away peacefully with his wife by his side at 1:00 a.m. on Tuesday, April 10, 2018, at his home in Marion. He was born on Friday, March 3, 1967, in Herrin, IL the son of Terry Ray and Barbara Jane (Bird) Jeralds. Kevin attended school in Herrin and was a graduate of Herrin High School Class of 1986. His working career was with Allen Industries of Herrin for several years, and later he began working for General Dynamics located west of Marion for 14 years until his health forced him to retire in 2005. Kevin was united in marriage to Donna Jean Griffin on Wednesday, October 23, 2013, in Marion and together they have shared over 4 years of marriage. He was of the Protestant faith. In his spare time he enjoyed fishing, playing video and board games, was an avid Chicago Bears fan, and watching UFC and MMA events. Kevin enjoyed spending time with his family and enjoyed the many times they spent together. The many memories created will now be cherished by those he leaves behind. He is survived by his wife, Donna J. Jeralds of Marion; mother and step father, Barbara and Larry Marlow of rural Johnston City, IL; two sons, Terry Dustin Jeralds of Flora, IL and Jalen Thomas Jeralds of Zeigler, IL; four grandchildren, Aiden, Ava, Gavin and Peyton-Ann-Marie; brother and sister-in-law, Keith Michael and Karen Jeralds of Royalton, IL; several aunts and uncles, Brenda and Dave Presley of Royalton, IL, Linda Kay and Bill Musser of Orange Park, FL, Ernestine Bird of Herrin, IL, Victor Bird of Herrin, IL, Tommy and Vicki Jeralds of Orland Hills, IL, Diana and Gary Wade of Herrin, IL and James and Dana Jeralds of Herrin, IL; four nieces, Kassie and Lacie Jeralds and Kaylee Wade and Chloe Dawn Griffin; nephew, Christopher, several cousins, other extended family and many friends. He was preceded in death by his father, Terry Ray Jeralds and grandparents, Wylie and Jean Bird and Charles and Floriene Jeralds. Arrangements for Kevin Jeralds were entrusted to Wilson-McReynolds Funeral Home, 900 N. Court St., Marion. The visitation was on Friday, April 13, 2018, from 12:00 p.m. until 2:00 p.m. at the funeral home. During the visitation a “Reflection of Life” DVD Memorial Tribute was presented to the family and friends and featured special people, places, and events of Kevin’s life. Following the time of visitation the memorial service was at 2:00 p.m. with Rev. Donnie Colson and Rev. Ralph Brandon presiding. The prelude and postlude musical selections were recorded piano selections. Special recorded vocal musical selections presented during the service were “Every Rose Has Its Thorn” by Poison, “When I Get Where I’m Going” by Brad Paisley featuring Dolly Parton, and “I Can Only Imagine” by MercyMe. Following the service at the funeral home family and friends gathered at Barbara’s home for a meal and continued time of fellowship and support. In lieu of flowers, memorial contributions were requested to be made to Kevin’s wife, Donna Jeralds, to help with final expenses in care of Wilson-McReynolds Funeral Home. Memorial envelopes were available at the funeral home. If unable to attend, memorial contributions were also made to Kevin’s wife directly: Donna Jeralds, 1207 North Monroe St., Marion, IL 62959. For additional information call the funeral home at 618-993-2131.

The family of Kevin R. Jeralds created this Life Tributes page to make it easy to share your memories.

Send flowers to the Jeralds family.