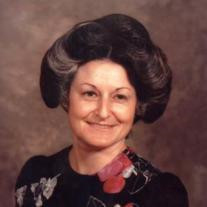 LaNell Sue Jackson Walls, age 67, passed away peacefully in her home on Monday, December 10, 2012 at 8:45 a.m. in Marion, IL. She had been bravely fighting breast cancer for the past five years. Her sister, Nancy Brandon, her husband and daughter were with her. She was the beloved wife of Reverend Ronald G. Walls. They pastored the First Apostolic Church together in Marion, IL, for a blessed 42 years. Married on March 25, 1967, their relationship is unsurpassed to any that have been known to exist. Even though time will never heal the pain of this loss for her family, it is devoutly believed she is now with our LORD, Jesus Christ in Heaven. She will be deeply missed by both family and friends. She was the unfailing, loving and devoted Mother of two adopted children, Ronnie, 27 and Annette, 25. Her children could not have hoped for a better example as a Mother, teacher, friend and counselor. They are thankful that she chose them as her children. LaNell was the adored daughter of Bernis and Opal (Harvison) Jackson. She was born unto them in Salinas, CA on August 17, 1945. Throughout her life, she was an adored aunt, pastor’s wife, friend, and sister-in-law. Her time on this earth was truly a testimony to all that knew her. Arrangements for LaNell Sue (Jackson) Walls were entrusted to Wilson-McReynolds Funeral Home, 900 N. Court St., Marion, IL. The time of the family visitation was from 5:00 p.m. until 6:00 p.m. and public visitation was after 6:00 p.m. on Friday, December 14, 2012, at Marion’s First Apostolic Church, located at 923 N. Bentley Street, Marion, IL. During the time of visitation a “Reflection of Life” DVD Memorial Tribute featuring special people, places and events of LaNell’s life was presented to the family and friends. The funeral service was on Saturday, December 15th, also at Marion’s First Apostolic Church beginning at 11:00 a.m. under the pastoral care of Dr. Nathanial Wilson, Rev. Dan Boyd and Rev. Stephen Buxton. Comments of memory were presented by LaNell’s husband, Rev. Ronald G. Walls; her children, Ronnie and Annette Walls; sister-in-law, Marilyn Walls and lifelong friend, Judy Sargent. The prelude and postlude musical selections were recorded selections. Special vocal musical selections presented during the service were “What a Wonderful World” as a recorded selection by Louis Armstrong, “From Heaven’s Point of View” by Heather (Walls) Dempsey, “Who Am I” by the Baxter Brothers, “Home” by Brian McKnight” and “Sheltered In the Arms of God” by the Baxter Brothers. Interment followed in Rose Hill Cemetery of Marion. Pallbearers were David Walls, Davis Walls, Jr., Marshall Walls, Marshall Walls, Jr., Nathan Walls and Darrin Sergeant. The committal service began at the cemetery with the congregational singing of “Amazing Grace”. The words of committal and personal comments were presented by Rev. Stephen Buxton. At the conclusion of the service there was a dove release of seven white doves that circled the area several times before flying away. Following the service at the cemetery the family and friends gathered back at the Family Life Center of the church for a meal and continued time of fellowship and support. For those who preferred, memorial contributions were made to “The American Cancer Society”. Memorial contribution envelopes were available at the church or were mailed in care of Wilson-McReynolds Funeral Home, P.O. Box 370, Marion, IL 62959. For additional information please contact the funeral home by calling 618-993-2131.

LaNell Sue Jackson Walls, age 67, passed away peacefully in her home on Monday, December 10, 2012 at 8:45 a.m. in Marion, IL. She had been bravely fighting breast cancer for the past five years. Her sister, Nancy Brandon, her husband and daughter... View Obituary & Service Information

The family of LaNell Sue Jackson Walls created this Life Tributes page to make it easy to share your memories.

LaNell Sue Jackson Walls, age 67, passed away peacefully in her...