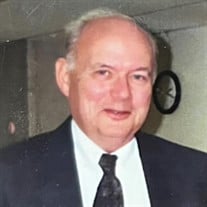 Larry H. Richardson, age 81, of Marion, IL, formerly of the Belleville and New Athens, IL area, passed away peacefully at 8:23 p.m. on Monday, January 17, 2022, in the Veterans Medical Center of Marion, IL. He was born on July 2, 1940, in Granite City, IL, the son of Henry Perry Richardson and Evanne (Hozian) Richardson. Larry answered the call of this nation by serving in the United States Army for nearly 7 years and after his period of faithful service was honorably discharged in August of 1964. He was united in marriage to Ruth Ann Muench on January 30, 1960, in St. Paul’s Lutheran Church of New Athens, IL and together have shared over 61 years of marriage. The majority of his working career was in banking and finance working for several different financial institutions in the St. Louis, MO, and Belleville, IL area. He was a member of St. Paul’s Lutheran Church of New Athens, IL. In his spare time, he enjoyed hunting and fishing when he was younger and watching documentaries on television. He loved his family and enjoyed the many times they all shared together. He was always interested in all of their many activities going on in their lives, especially those of his grandchildren and great grandchildren. The many memories created will now be cherished by those he leaves behind. He is survived by his wife, Ruth A. Richardson of Marion; son and daughter-in-law, Craig L. and Linette Richardson of Vienna, IL; daughter and son-in-law, Nicole S. and Dennis Sinn of Marissa, IL; seven grandchildren, Sara Aronson, Courtney Schwartzkopf, Brooke Richardson, Kristine Richardson, Savanah Sinn, Jessica Richardson and Jacob Richardson; thirteen great grandchildren, Grace, Olivia, Drake, Aiden, Lillian, Lorelei, Corbin, Ezra, August, Nova, Gavin, Ira and Ellie; two brothers, Gary Richardson and Brian Settles, other extended family and many friends. He was preceded in death by his parents, Henry Perry Richardson and Evanne (Hozian) Richardson Settles and grandson-in-law, Josh Aronson. Arrangements are entrusted to Wilson-McReynolds Funeral Home, 900 North Court Street, Marion, IL. A memorial service will be accorded at a later date. The family has requested for those who prefer, memorial contributions be made to either or both; “St. Jude Children’s Research Hospital” and/or “Shriner Hospital’s for Children.” Memorial contributions may be mailed in care of Wilson-McReynolds Funeral Home, 900 N. Court Street, Marion, IL, 62959. For additional information call the funeral home at 618-993-2131.

The family of Larry Henry Richardson created this Life Tributes page to make it easy to share your memories.

Send flowers to the Richardson family.